A Lesson in Geography 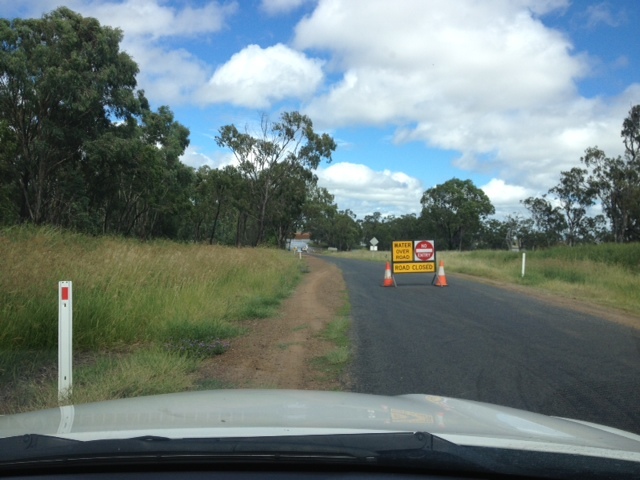 It's been an interesting day, one way and another.

I set out pretty early, with jobs in Millmerran and Goondiwindi. I'd done this trip heaps of times before. An hour down the Gore Highway to Millmerran - to do the first job there, which easily left enough time for one school visit during the afternoon in Goondiwindi if I didn't stuff about.

It had rained steadily all weekend, so I stayed tuned to local ABC radio, usually the most reliable source of road information as I drove south-west.

There were lots of reports of flooding on the Warrego, at Dalby and Warra, but this wouldn't be an issue. I was heading down the Gore, not the Warrego. The Gore didn't get a mention.

I noticed a lineup of semis at a service station east of Millmerran - something I'd not seen before on this road.

The reason for the lineup was soon revealed. The road was closed at the Cecil Plains turnoff. The news has been broken on the truckies' CB network, so they'd stopped where they could get a feed and a shower whilst they waited for the Condamine to go down. The bloke in the high-vis jacket at the barricade reckoned it needed three or four hours at least.

The bloke in the high-vis suggested I backtrack through Pittsworth, across to Leyburn, and access Goondiwindi via Inglewood. I dragged the iPad out and had a look at a map. Three possible routes came up when I interrogated the maps, and the rivers weren't marked.

I phoned Millmerran and broke the bad news. They were philosophical. Quite a few kids and teachers were also floodbound.

Because the rivers weren't marked on the iPad map, I wasn't completely confident this alternative route would work, as I knew I had to cross the Condamine somewhere.

I've learned not to trust the Condamine. It royally stuffed my trip from Roma to St George when it was up at Surat a fortnight ago.

Sure enough, I came across another "road closed" barricade at the alternative Condamine crossing.

By now, I'd had enough of back tracking, and decided I wasn't going anywhere without being absolutely sure the road was open. With this in mind, I pulled up at the next school I came across (Ryeford) to make sure.

It's no use asking school principals about local roads. Generally they're people who have been transferred from elsewhere. The Teacher Aides are usually fonts of wisdom in these situations. They're locals.

So it was at Ryeford, where a helpful Aide sent me down the Pratten road, where the Condamine crossing was a high level bridge. This took me through Leyburn, where I asked at the school again, and where another Aide reassured me the road to Inglewood was open. She was right.

I got to see Inglewood again after a slight gap of 45 years. I started teaching here in 1968, but was transferred to Goondiwindi after three weeks because the school lost a teacher.

It hasn't changed much, although the school looks much larger.

Goondiwindi was reached at about the time forecast on my official itinerary, so the day wasn't wasted. I'll have to try to fit Millmerran in before term's end.

I'm getting more than a little browned off by the constant flooding.

As I said - an interesting day.

Queensland - beautiful one day, submerged the next.....

If it weren't for the downside you wouldn't appreciate the upside.

True - I also appreciate the outside more than the inside......

Did they find that teacher that was lost?

I was never lost Cav - temporarily misplaced.....
Sadly, they did find a bloke from Leyburn however who was drowned in the Condamine. He'd been missing for a day or two.