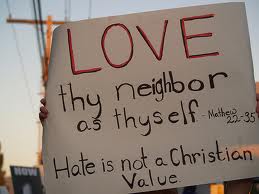 A cursory glance at Australian history reveals our consistent and pathological need to harbour fear. There's a permanent bogey man hiding under the bed where our national psyche sleeps.

Perhaps it has something to do with our convict origins. Perhaps being dragged to the ends of the earth, never to see your home and family again, is deeply traumatising. It seems that a kind of collective historical PTSD has emerged, the primary symptom being irrational fear.

Whatever its origin, from time to time, pollies use it to frighten the voters. It works a treat.

More often than not, the objects of this chronic fear and loathing have turned out to be historical chimeras.
First it was the Chinese. Remember Lambing Flats? Then there was the Hun in WW1, followed by the Commies in the late 20s. Remember the New Guard?


The full sweep of history reveals the mythical nature of this paranoia. Ironically, the real dangers (Imperial Japan for example) never generated fear and loathing until well after the threat became obvious. Remember how the Japanese were considered short sighted and technologically incompetent? Menzies was dismissive and happy to sell them the materials to wage war. Fascism emerged in this country between the wars, and admiration for Hitler - he made the trains run on time - was fashionable in some circles.

Flushed out by the likes of Menzies and Santamaria, the Reds emerged from under the bed in the 50s and 60s. Menzies turned the fear of Communism into an art form. He tried unsuccessfully to have the party banned, but surfed into power on the backwash over and over again. (His use of the Petrov affair in 1954 provided a template for Howard, almost 50 years later, when the Tampa loomed on the horizon).

For a time the wave of post-war immigrants became a target. The terms "wog" and "reffos" were all the go. The fact that our post war prosperity was largely built on the backs of these people blunted it somewhat. The loathing was not used as a political wedge back then, but it simmered under the surface.

There were other consistent anxieties. The Protestants were afraid of the Catholics, and the straights of the gays. The former has evaporated, and a rearguard action is being fought around the latter in our legislatures.
There were dark mutterings in the seventies and eighties about Vietnamese boat people, but back then we had political leadership with mettle, and it was essentially defused.

Compare that with the recent paranoia generated by boat arrivals. It's been variously called an "invasion" or a "wave". A more accurate metaphor would be a "trickle" in comparison with the numbers in other countries. But then, a good scare will always trump a sense of proportion. The hysteria is now bi-partisan.

The potency of one particular brand of paranoia – the fear of Aborigines, called “savages” at the time - had enough power between 1813 and 1830 to wipe out an entire race in Tasmania - powerful stuff.

It’s always been there. Remember Mabo? Remember how the Kooris were going to be camping in our back yards and taking over our parks and gardens as a result of the decision? I wonder what became of that.

And now it's the Muslims.

A group of religious fanatics kill 3000 civilians in New York and Washington in 2001 and in the "get square" at least 120000 civilians have died in Iraq. Bringing “democracy” to that part of the Middle East has cost the lives of over 4000 coalition soldiers, and still the bombs explode. Remember the weapons of mass destruction that never were?

Throughout our history, fear and loathing as a political tool has been used successfully to collar the mob. The mathematical principle of using the lowest common denominator has endured.

Since the First World War, it has thrived on the template established in Europe in the 30s. It continues to be exploited by politicians on all sides. What these alleged “leaders” have in common is their lack of backbone, leadership and courage. Cowards have always understood how to use fear. It’s crude, simple and effective, and there are always reserves of xenophobia waiting to be tapped.

Frankly I'm jack of it. Excuse my plain speaking, but those who use bigotry as a political wedge can shove it where the sun doesn't shine.

I saw enough of the results of fear and loathing 40 years ago to convince me that it's the mark of the Neanderthal. I well recall abject terror in the eyes of an old Vietnamese woman caught in a free fire zone in April 1970.

Catallaxy is almost a waste of space mate, you are trying to, preach to the converted and it is just not going to work, like kneading snow.

BTW I had an amzing trip to the Military memorial museum in Saigon (HCMC), only a few weeks ago. The place really rocked me and when I saw a photo of a guy I did my apprenticeship with, well I just lost it.
Went to sit outside to get my head together and this elderly Viet. lady sat next to me and stroked my shoulder, all the while tears rolling down her face, saying over and over, its OK Aussie, not happen ever again, its OK aussie.............its OK.
Totally blew me away

Amazing place that museum. I've been back a few times, and each time have been met with genuine warmth from people introduced to me as ex-VC. I've had a beer or three with some of them. I never detected rancour - only genuine admiration and empathy.
The older people, especially the women, hold so much grief, even after all this time.
For those who are too young to remember, the war is a non-issue.
You may enjoy this - http://www.independentaustralia.net/2012/australian-identity/australian-history/reflections-on-the-fall/

Well I am going back in the new year, my 3 sons will be with me and we will all go and visit. BTW I watched an American fellow, older guy with a flight cap on, doubled over and throwing up on the front lawns.

"and a rearguard action is being fought around the latter in our legislatures".....is that a play on words in this case?

"The Protestants were afraid of the Catholics" ......obviously the perception of a Cathoholic.