The Biter Bitten (or The Mice that Roared) 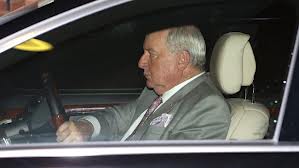 So poor old Jonesy is complaining that the advertisers endorsing his programme are being victimised.

Listen carefully, and you will hear the clucking of chickens coming home to roost - the bully is "victimised" - Priceless!

If you pay your company’s money to 2GB to fund Alan Jones to publicly vilify people daily, I’d assume that you were prepared to accept the consequences.

It’s a bit like going to a supermarket, and noticing that in one corner of the shop a geriatric loudmouth shouts abuse at (say, for argument’s sake) anyone who looks vaguely of Middle Eastern appearance. You could of course, substitute members of the Labor party, unionists, coal seam gas miners, and females in positions of authority for this same group of targets for abuse.

Guess what? I don’t think I’d shop there anymore.

To quote Jones - "They don't have the right to decide for Australian companies which media outlets they will or won't use to advertise their products and services,"

That’s strange. Isn’t the right to choose products and services one of the fundamental tenets of our free market?

Consumers have every right to reject products endorsed by bigots.

If these same consumers want to get organised, and place a facility on-line to make this rejection easier, and make it public, what's the problem? Isn't that called free speech?

Of course, this issue is fundamentally about power.

The tables have been turned by social media. The same harnessing of the new media has brought down totalitarian governments in the Middle East. It’s a healthy phenomenon. It empowers people who previously had no voice.

If you'll excuse a clumsy metaphor - the mice* have roared.

When vested interest and privilege starts to feel this power in the hip pocket, suddenly it’s unfair.

Jones (and 2GB) can’t see the irony. But then, Alan Jones has never been conspicuous for demonstrating a sense of humour.