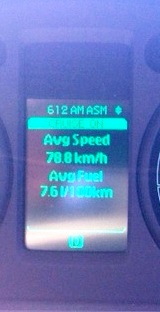 One of the reservations I've always held about owning something with six cylindersare the running costs due to  the ever increasing cost of fuel.

The best price you can get in Toowoomba at the moment is 141.9cpl, and that's with a shopper discount.

So I've been keeping a weather eye on the fuel slurping characteristics of my recently acquired six cylinder ute.

In that regard, I've been pleasantly surprised.

On a trip to Brisbane yesterday, it went as low as 7.6 lit/100km. That's MX5 territory, and better that our Ford Focus which will get in the eights for a similar journey.

Even in the cut and thrust of city commuting (or the Toowoomba equivalent) I've seen mid elevens in the Commodore.

I was considering an LPG conversion, but doubt now whether it makes economic sense, given these figures, the steadily rising taxes on LPG and the phasing out of the subsidy.

Unless of course Romney ends up in the White House and does a George Bush in Iran.

It's entirely possible. Consider what would happen to crude prices if there was a stoush in the Straights of Hormuz.

The big extra expense with a six (in Queensland anyway) is the cost of registration.

Napoleon Newman was going to put the lid on rego costs - one of many broken election promises.

It is a Commodore after all.

Only a little bit. Fill to fill calculations on that trip came out at 8.2 lit/100 km, and that was after driving into Brisbane CBD and out again.
Call me feather foot.