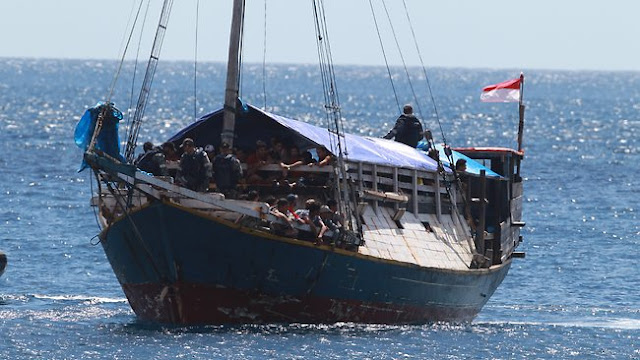 I’ve been watching, with increasing dismay, the performance of our parliamentarians and their camp followers (the mainstream media) on the asylum-seeker issue.

Recently a couple of boats have foundered, and many people have drowned. This is intolerable, and the endless loops of body bags and floating corpses in life jackets have driven home the point.

I’m a little confused by the current hype, given that the greatest death toll involving asylum seekers, that of SIEV X on October 22, 2001 drew very little attention in the local media at the time.

It was reported, but there was nowhere near the saturation coverage we’re seeing now.
Best estimates had 353 people, including 146 children, 142 women and 65 men drowning in that incident, which occurred incidentally in the days of offshore processing and TPVs.

This is not to dismiss the tragic nature of these most recent drownings, but simply to point out the confected nature of the media coverage. It is every bit as contrived as the posturing on the floor of both houses today.

At least the Greens, despite all the crap directed at them, have a set of principles on this issue which don’t change to suit the current media meme.

This is a complex and vexatious problem, but I wonder whether stripping it down to its basics might shed some light.

The basic facts are not complicated.

There are thousands of refugees holed up in Indonesia and Malaysia. If they were to follow the UNCHR processes they could expect to wait up to seventy years or more to get to Australia using officially sanctioned means. Arrivals coming this way using official channels have been averaging 60 per year from each country. I doubt too many are prepared to wait for this process to reach its conclusion.

They want to come to Australia, of course. Why wouldn’t they? We are a country that respects human rights as indicated by our support of UNHCR processes.

There is a well-organised cohort of people smugglers who, for a price, will offer them passage to Australia on dodgy boats.  Some don’t make it, and drown on the way. They’re desperate, and will continue to take the risk whilst ever this trade continues.

We have international obligations under the UNHCR conventions. All our major political parties recognise these conventions, and use them (when it suits) to justify their policies.

Put simply, the refugees are stuck in countries not too far to our North. They have a right under conventions we recognise to seek asylum here. We could take this population out of the official camps, process them in the host countries, and fly them to Australia more or less overnight.

They would have no need to pay people smugglers. The so-called business model would fall in a heap.

This assumes, of course, that we really do welcome refugees. A quick read of any of the right wing blogs reveals of course, a rich vein of racist xenophobia which continues to hold our politicians in thrall since wee Johnny used it to help him win an election.

The same xenophobia existed in the days of the Vietnamese boat people, but back then we had politicians with backbone who offered leadership, so we processed them and brought them here anyway.

I witnessed this xenophobia first hand when driving a busload of Vietnamese kids to a cinema in Enoggera in 1976. A driver pulled up whilst they were getting out of the bus at the cinema and proceeded to call them “dirty Noggie c**ts”. Fortunately, their English wasn’t good enough to get the full gist, but they knew he was hostile.

The point of this story is that a proportion of these cretins will always exist, but they’re best ignored. You don’t (as Howard did) exploit their ignorance for political advantage.

On the whole, the Vietnamese have become great citizens. Have you looked at the national registrar of medicos lately and seen how many Dr Nguyens are listed?

So we could solve the “problem” of boat people drowning quickly and easily. But I wonder if the “problem” has more to do with our attitude towards refugees than it has to do with lives at risk.

We take a tiny proportion of international refugees in this country. We rank 91st (per 1USD per capita) on the list. The Yanks take more refugees (border hoppers) in a weekend than we do in a year.

There is an issue of newly-arrived refugees concentrating in ghettos, usually in the poorer sectors of our major cities, particularly Sydney and Melbourne. This is unfortunate, and it works against assimilation, and scares the bejesus out of the locals.

There is a solution to this. Remember the Australia Card? Ignore the bleatings of the Libertarians, introduce it, make it compulsory for everyone to carry, and pass legislation that sets up immigration zones. Acceptance of citizenship could be made conditional on residence in one of these zones.

Sounds a bit “big-brother”? Perhaps, but I doubt it’s any more totalitarian than offshore processing.
at June 28, 2012

Email ThisBlogThis!Share to TwitterShare to FacebookShare to Pinterest
Labels: Refugees