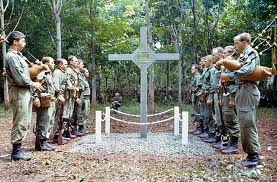 I've been struggling to post something relevant to Long Tan. Working 500km from home (Charleville and Cunnamulla) has delayed this somewhat. Blogging on the go works in theory, but you need to get all your ducks in a row.

The duck called reliable wireless networking has been missing.

Surely everything that could have been written about Long Tan has been written. Nothing new can add to the stark simplicity that a company of diggers overcame impossible numerical odds and held out against a determined and well-organized enemy until relieved.

This year, the media story has been the awards. Somewhere embedded in this narrative is a metaphor for the war. The shameful reality that it took 45 years for these diggers to be recognized says it all. Our national understanding of this conflict improves with time, but it still has a way to go.

I should know. No soldier's service should be used to abuse or denigrate, but if you have the temerity to identify as a veteran opposing the political orthodoxy, that is precisely what happens.

The first time I saw Long Tan was at the beginning of our second operation in April 1970, when we brewed up after getting off the trucks and before setting out on a night insertion into the AO.

I remember thinking at the time of Frank Topp who was killed in the first ten minutes of the battle. He was attending Downlands college in 1961 when I arrived as a homesick 13 year old over 1000 kms from home. Frank hailed from Helidon in the Lockyer Valley. Home for me was North Eton near Mackay in Central Queensland.  In those days this boarding school was a pretty tough environment, and Frank behaved a bit like a big brother. For reasons I've never really understood, he was good to me back then. Perhaps he sensed that we were both from the wrong side of the tracks, different from the sons of landed gentry who comprised a fair whack of the enrollment.

He enlisted not long after leaving school, and ended up in RAEME. After a few years of service he transferred to Infantry, and arrived in Vietnam as a Reo in July 1966. He was posted to 6RAR a fortnight before Long Tan  and joined D Coy on the morning of the battle.

The last time I was at Long Tan was March 2006. It's a haunting place - full of the ghosts of brave young men.

You may be interested in this poem about Frank: http://www.5rar.asn.au/poems/frank-topp.htm

Epic poem on Long Tan in Flashbacks Through a Tiger's Eyes