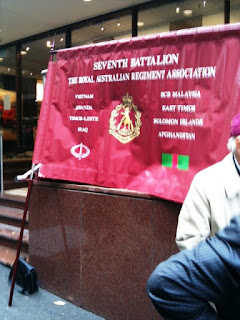 I’m home again after travelling to Sydney and back to march with a couple of blokes from my rifle platoon.
The fact that I hadn't seen one of them since June 1970 made it an interesting experience. They were good men then. The years have leavened them, and they're better men now. I also met other blokes, not from my section, but from my platoon and company.
They have dealt with their experiences in different ways. For some it has been a struggle.  One has done it especially tough, with the suicide of his beautiful daughter. He wasn't in Sydney, but I took a phone call from him on Anzac Day, which was an amazing coincidence in its timing, or maybe he simply knew we were together again.
Hearing this and a few other stories made me regret not staying connected - maybe I/we could have helped at the critical time. I've done enough counselling to learn that timing is everything in times of stress. Sometimes just being there is enough.
For me, the fact that all the men that I have reconnected with have had to deal with PTSD in one form or another is disturbing. I'm the only one as far as I know who is not TPI.
Enough of the darker stuff -our mini-reunion was a hoot -
1.30am - Reveille to catch the train into Sydney to join the Dawn Service at 4.30am. It poured - we had $3 transparent plastic ponchos that had been sensibly bought by one of the wives. It was a good thought, but putting them on in the semi-darkness was a drama. A voice from behind was heard - "look at these silly old buggers - no wonder they lost the war". Unkind, perhaps, but after watching us trying to get into them, not unexpected.
6.30am - gunfire breakfast. I exchanged a few words with Ray Martin - although I'm not entirely sure what he was doing there. 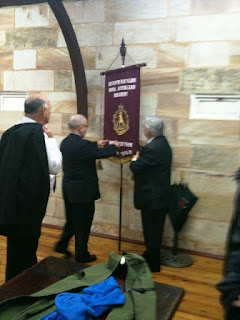 8.30am - Battalion commemorative church service at the little church in The Rocks. This was a solemn and uplifting occasion. As a Catholic, I was surprise at how similar this ceremony was to a Mass. Here I met that great soldier, Sandy Pearson, who when he found that I came from Toowoomba, told me a story of a digger who was swept to his death trying to push a jeep from a creek near Cabarlah in 1945. Apparently there were flash floods in the Toowoomba area back then similar to what happened on 10th January this year. The sad part about this story was that this digger was a survivor of the Sandakan death march. I hope I'm as spry as Sandy Pearson when (and if) I get to 92, and that I can recall as vividly as he still can, events from the past - a great man and an outstanding soldier. 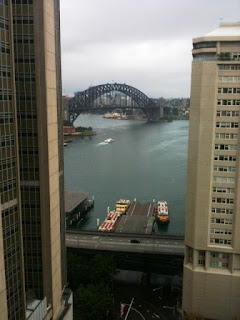 9.30am - time for a break in a room in the Intercontinental. There are great views of the harbor from here.
10.30am - the march. A new banner had been made for the occasion, but it lasted about ten minutes. The two blokes carrying it had their work cut out from here, as they had to support the thing at shoulder level for the rest of the march. The Sydney march is on a much larger scale than anything else I've been part of before, and it has become unwieldy with much starting and stopping.
12.30pm - lunch at the Castlereagh club. Many lies told here for the remainder of the afternoon. I learned a lot about what happened and why it happened, especially after we split up all those years ago.
4.00pm - a suggestion that we go to the footy. This was knocked back on the basis that we had been on the go since 1.30am, and were probably not in the best shape for an NRL game, even as spectators. Besides, there were no Queensland teams playing.
5.00pm - we caught the fast train to back to Gosford where I was staying.
7.30pm - home again. It had been 18 hours since we set out. We'd walked (and marched) everywhere. Someone said that we hadn't walked so far in one day since patrolling in 1970. I reckon that's true.
Next day I had to drive back to Toowoomba to head for work which involved leaving there at 6am to drive to Roma. No wonder I feel buggered today.
Still - no regrets.
I should have done this 40 years ago. I missed the Welcome Home march in 1987 but this must be what it felt like.
This pic, which I've posted before, shows two five platoon blokes as they looked in 1969. 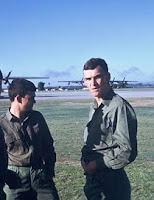 This is now – still looking good…only the hair is different. 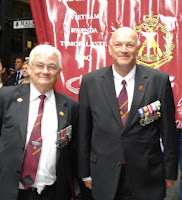 Gee, another boy from the pigs!!

I think we got a few blokes come over to us from 7 when you blokes went home.