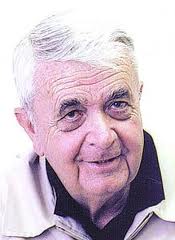 There's is a view (often promoted in the right-wing blogosphere) that compassion is a vice.

This has always bewildered me, possibly because I'm the product of a boarding school run by the Sacred Heart order. Their logo is quite literally a bleeding heart. The use of the word as an insult is un-Australian. It's crept into our language from across the water to the East.

Anyway, compassion is, to me and always will be, a human virtue. I believe that this world would be a much better place if more of this human vurtue was demonstrated by individuals, government and community.

To celebrate this virtue, I'm posting a tribute to a Father Kevin Ryan, a prison chaplain who died on March 13th. I would never miss reading his weekly column in the Catholic Leader. I'll miss it now.

The first part of the post is a tribute to him from last Sunday's Leader.

The second part is one of his last columns.


Kevin was a man of great experience and compassion, a man sensitive to other’s needs who did his best to respond to them. His closeness to God was not the over-spiritual which he mistrusted, but in everyday happenings and people. He was no one's fool, but could evaluate character without needing to judge it. He quickly established rapport with even those who were least open to an approach from a clergyman. His response to one of these challenges: "I don't like Catholics", was, "That's all right, and there are plenty of them I don’t like too".
Kevin's communication style was direct, uncomplicated and easily understood. As a priest and a man in a man's world, he said what was needed when it was needed, especially in his writing. When you read his columns in The Catholic Leader, you can always hear his voice saying it - the words are exactly as he preached - practical and down to earth. He The Leader for a reflective column that was not too "learned". He did something about it.
It seems everyone who read The Leader read his columns.
Fr Kevin was well respected by the prisoners and they looked up to him as a father figure for help. Once I saw a rare joyous smile light up the face of a young man (under observation for continuing self-harm), when Fr Kevin entered the room. The young man rushed to embrace Kevin. I doubt I will ever forget his joy when he saw Kevin arrive.
In the corrections system his humility and empathy gained him a reputation among the residents as someone who could be trusted to share the most intimate details of their experiences. But always on matters of principle it was recognised that he would not be compromised. He was non-judgemental and for a man who was universally respected he had exceptional humility. But he also had amazing empathy and an ability to hold confidences.
Some of these traits must have been instinctive as Kevin himself used to say, "You can't teach a dingo to round up cows". I don't think he had a strong sense of ceremony in the liturgy - he could rush on to the altar
with his vestments a bit awry.
What a down-to-earth, sensible, caring and practical man he was - respected and loved. Compassion and practical caring marked Fr Kevin. He never asked why, he just gave - he was the channel from a loving God to anyone in need.
Like the Lord, Kevin had us all in the palm of his hand. There are many tales of his countless acts of kindness; when Indonesian boat traffickers (arrived) he sourced an Indonesian-English dictionary to help those with limited English to cope in that environment.
Whenever the media broadcast or published news of the most appalling and horrendous crimes, Kevin would scan the nominal roll at Arthur Gorrie to seek out the offenders and offer them emotional support. When residents expressed anxiety about how their families were faring,
Kevin would call parents or partners or children, and without breaking confidences, would reassure them they could rely on him for emotional or spiritual support.
If Banjo Paters on were alive he would have penned a poem honouring "Kev, the Chaplain"

Today’s column draws on the thoughts of Marie Gallagher, a writer in the January edition of Reality, published by the Irish Redemptorists. While she writes specifically of Ireland, much of what she has to say can apply to Australia and gives food for thought in this time of Lent.
A dapper young man was telling his friends in the pub of how big a success he was financially. He had land, investments, money in the bank and a healthy insurance policy. His future was assured.
An older man sitting nearby with his paper and beer intervened.
"I have something you'll never have."
The dapper young man stopped and with a smirk said: "What might that be?"
To which the older man replied - "enough".
In a society driven by money and what it will buy, there is always the risk we will let it take over our lives. There are people who have ability to make lots of money. There's nothing wrong with that provided it doesn't dominate their thinking and damage other people along the way.
We know that St Paul was right when he said money is the root of all evil. We don't doubt the wisdom of Jesus when he said we can't serve two masters or that where our treasure is that is where our heart lies. In a world where money just seems to pop out of an ATM it is so easy to think all this refers to big companies, governments or other people, but the Gospel message is for everyone.
In some ways money does talk. A man down on his luck admitted that when he said his just said goodbye. We hear about false gods and those bits of coloured paper we have in our wallets can be signs of false gods.
Our response to a natural disaster is to give heaps of goods we don't need. Even if we don't shop there, just walk through our charity shops and see what we've thrown out. We keep on buying to fill up cupboards that are already full. This is a long way from the thinking of the late Sr Kate Flannery, of Our Lady's Nurses of the Poor, who used to say that we had to keep our cupboards empty, so God could put more in.
When is enough, enough? A bit of street art in the docklands area of Dublin said, "Greed is the knife and the scars run deep".
It is easy to be greedy, even for those who have little. What is true wealth? What is the bottom line in our relationships, our help of others or living out high ideals? We picture ourselves standing before God one day. He'll be looking at what we're worth without money. Many of our achievements will be left behind as we leave this world as we came into it.
I remember this story from the housekeeper at a priests' house in Ireland. She told how the richest man in the village died the night before. He was mean with money.
Following local custom she went to Mass before visiting his home.
She said, "there he was, lying dead on his bed. I looked at him and said, "your money isn't much use to you, now."
In the spirit Lent could of we begin in our families to realise that debts have to be repaid, that money must be managed, that we have to save for what we want. That we learn from the careful lives of our old people and not from economists. Who is our model – our grandmother - or Murdoch, who at the age of 80 goes on another spree?
As deterrent to reckless spending we could keep in mind that bit of street art reminding us that “Greed is the knife and the scars run deep".
Posted by 1735099 at 10:03