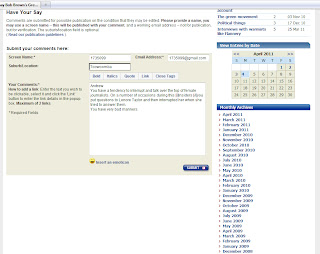 I watched Insiders on Sunday as I usually do, without realising Andrew Bolt was a guest.

This is usually enough to make me switch channels, as he invariably spends most of the programme indulging in attention-seeking behaviour, which turns it into a circus.

At one point he was attacking Lenore Taylor about his pet peeve (AGW).  His technique is to verbally harass journos (especially females) in order to get some kind of reaction - which he writes up on his "blog". I use the parenthesis because by definition a blog encourages sharing and discussion. His effort allows real dialogue only with those who agree with him.

It reminds me of an arsonist lighting a fire in a school and returning to watch the fun.

Taylor tried to answer his question - but he kept interrupting her. Barrie Cassidy showed an uncharacteristic lack of backbone as moderator.

Eventually she said something sotto voce. She had shown courtesy and patience up to this point. What is said is barely audible. When I watched it, it sounded like "for pity's sake".

Her patience was phenomenal, given the fact that he had interrupted her over and over again, wagged his finger like an outraged school marm, and turned himself into some kind of grand inquisitor. The fact that she didn't tell him to "piss off" is remarkable. But she didn't.

Bolt made a great fuss about the non-existent comment - his invention. Today there was a reference on his MTR post admitting to the fact that  she didn't use those words, but the previous post remains. He made have said something on MTR, but I have better things to do in the morning than listen to that self-indulgent nonsense.

A gentleman would withdraw the smear and apologise publicly.

His confected outrage had the carefully crafted result he sought.  The language (not used by Taylor) became the issue - not the logic of the argument - not the dialogue. This is the time-honoured technique perfected by the likes of Jones and other lightweights.

Having said this, I think I've found a good match for Bolt's penchant for making up "facts" and making himself, rather than the issue, the story. He should be on the Onion.

It's a successful "news" site in the USA. It has a following from Generation Y and the Millenials. Basically, it makes up stories, and turns them into entertainment - right up Bolt's alley - the "making up" bit at least. I'm not sure about the entertainment value.

On second thoughts, he probably takes himself too seriously to be comfortable in the role.

We had a name for this behaviour in the army, but I wouldn't use it here, gentle reader. I won't be accused of ungentlemanly behaviour.

I agree with what you say - he needs to wind back a notch or two.

Lately he is getting too big for his boots. Maybe it's the court case.

One of his failings was always his inability to sit and listen to another point of view without looking down and shaking his head.

That's what should happen in a normal debate. We let the other person have their say and then we respond, and we only need to state our point ONCE!

What I find strange is his defence of "free speech" lined up with his vicious censoring on his blog of anyone who challenges his opinions. I should know - I've been banned about five times.
The pattern I've noticed is that you get banned if you show him up. That's not difficult, as he makes up "facts". A bit of basic research usually does the trick.
Having said that, I would never take him to court. He enjoys the exposure and the attention it provides. We need to allow shock jocks to speak out even when they are complete hypocrites.

Just saw that Bolt will have his own show on TEN Sunday mornings at 10.00am

I find we are watching TEN more than the other channels now.

But you are right about the ads, do they save them up and show them all during "The Good Wife?"

And back to Bolt, will he try and do a Bill O'Reilly?

They do have something in common in that they've both been successfully sued. Bolt was sued by Magistrate Jelena Popovic in 2002. She was awarded $246,000 damages for defamation.
Andrea Mackris, previously producer for The O'Reilly Factor, sued O'Reilly for sexual harassment in 2004. She was after $60 million in damages. It was settled out of court, but must have cost him heaps.