Methinks they doth protest too much..... 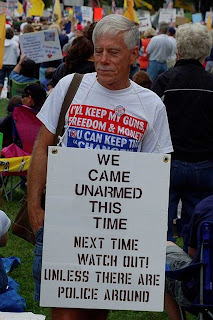 Australian conservative bloggers, including Bolt and Blair, have been very busy lately with trenchant criticism of mainstream media connecting the rise of extremist rhetoric with the Tucson shootings.

Where they maintain that there is no obvious connection, I agree with them.

But there is a toxic political climate in the USA - or more correctly, a toxic culture.

The dictionary definition of "culture" is "a medium for growth". The metaphor is a petri dish in which an organism is introduced to help that organism grow and develop. The culture is the material in that dish which allows the organism to grow.

Let's take a look at the composition of that media culture.

First, there's the mainstream media. They haven't changed or developed much in the last five years, except to use different forms of technology to market their material. There is a range of opinion across this media, and generally, it's balanced.

The next level is the corporatized opinionista. Generally, this segment makes their money out of advertising which is directly related to internet hits and radio ratings. To increase your hits and ratings, you need to post or broadcast something that is on the outlandish end of the opinion spectrum.

Here, and in the USA, they're generally to the right of the political spectrum. In the USA, amongst others, there are Glenn Beck and Rush Limbaugh. Here, we have Alan Jones, notorious for his barracking around the time of the Cronulla riots.


Cronulla is a text book example of an immediate response to inflammatory rhetoric.

For examples of this kind of rhetoric across the Pacific, it's instructive to read a small selection of material broadcast recently. 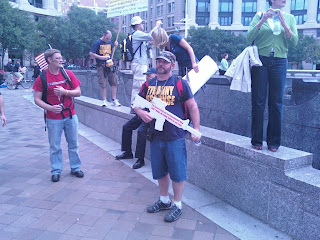 Glenn Beck -
"I'm thinking about killing Michael Moore, and I'm wondering if I could kill him myself, or if I would need to hire somebody to do it. ... No, I think I could.


"I think there is a handful of people who hate America. Unfortunately for them, a lot of them are losing their homes in a forest fire today."

"What better way to head off more oil drilling, nuclear plants, than by blowing up a rig? I'm just noting the timing, here."


"The only way to reduce the number of nuclear weapons is to use them."

There's plenty more where that came from.

I've included some images, as they tend to be more powerful than words. 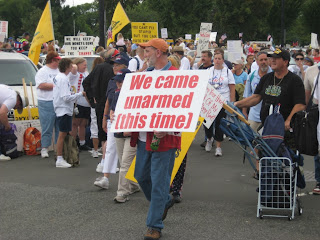 It's patently obvious that this rhetoric and imagery contributes to a culture where all bets are off when it comes to civility, but it goes further than that. The metaphors and images used are frequently violent and give the impression the rule of law no longer applies. It's easy to gain the impression that you're free, as a citizen, to take matters into your own hands.

Most people let this wash over them. There are always a few who don't.

People like Bolt and Blair who make a living out of whipping up hysteria to increase hits are free to do so, but they have a heavy responsibility.

It's time they recognised this, and pulled their heads in before we see the same kind of incident on this side of the Pacific.


Generally, (and unfortunately) trends in the USA are picked up here. Hopefully, our national psyche is fundamentally sane, but anything's possible.
Posted by 1735099 at 08:17