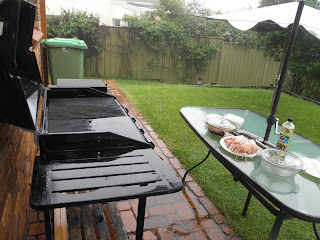 The deluge we're going through at the moment reminds me of 1974.
For those of you devoid of wisdom as a consequence of lack of age, 1974 was the year when South East Queensland in general and Brisbane in particular was visited by catastrophic floods.
Back then the cyclone that did the business was called Wanda. The one meandering down the coast this time is Tasha. Perhaps two-syllable girls' names ending in "a" should be avoided by the boffins responsible for cyclone nomenclature.
So far, we haven't had a situation anything like 1974, mainly because this depression is taking a different track, but it's bloody wet.
There is a family tradition of inviting all my siblings (I'm the eldest of six) to a Boxing Day BBQ. It's grown out of a mixture of nostalgia (my parents, when they were alive originated the idea) and the necessity to create a bit of refrigerator space. The family fridges are crammed with Christmas Day leftovers, and the deal is - bring a selection of leftovers, steaks or snags for the BBQ, and your favourite tipple.
Given the dreaded breathalyser, the tipple has taken a bit of a hiding, unless those from afar crash overnight (not literally) or book a motel. There's always the "designated driver" deal which also works well once the short straw is drawn.
Over the years we've got it down to a fine art, even to the extent of designating different areas of the house for the different generations. Despite this segregation, the whole crew always get together when food is available.
It was our turn to host this year, and my bride and I got busy and set up a BBQ. Our four offspring, home for Christmas, were conscripted in roles as diverse as untangling party lights, buttering bread rolls, and removing their junk from public areas in the house.
Given the weather forecast, I took the precaution of setting the BBQ up under a very large outdoor umbrella, and I covered our Hills hoist and pergola with tarps. This would have worked had the rain been vertical, but it was, in fact, semi-horizontal, so in the end, the cars had to be banished, and the garage set up with TV (for the cricket), eskies, and party lights.
The MX5 sulked in the rain - it is always garaged. It's as well that the little Japanese assemblers in Hiroshima made such a good job of sealing the ragtop - not a drop got in after all day in a downpour.
We had a couple of no-shows as some roads were cut, but in the end it was a good day. I proved that you can BBQ in the rain. First the accumulated water on the hot plate had to be burnt off, but this was accomplished easily in clouds of steam.
After that, I needed an assistant to shuttle the cooked meat and sausages inside, and that assistant needed a second assistant with a brolly. Carrying a plate full of sausages one-handed and an umbrella cannot be achieved with stubby in hand. The assistant was OK - he had stubby in one hand and brolly in the other.
The rigged-up umbrella worked fine, and any drops were evaporated by the heat of the BBQ before they landed on the food.
'
After the first session of play, we stopped watching the cricket….
Now I have to drive to Brisbane this morning to return two offspring to the big smoke because they're going back to work - every dollar is precious to impecunious students.
I'm not looking forward to the journey. It's still raining cats and dogs.
Posted by 1735099 at 06:23

Copy the link and paste it in your browser, dickhead.

Did that ...didn't work. It did when I copied it from Kev's blog, though. Who's the dickhead?