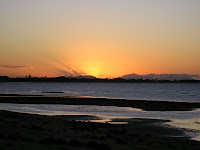 Bowen has always been Somewhere Else.

When I was a kid in Carmila, I learned about Bowen in grade six. Apparently there was a time when it had been considered as the capital of Queensland. This was because of a combination of reasons to do with its central location, and its harbour.

Longreach has been viewed in the same way - it's a pity that the idea was discarded. Perhaps if either Bowen or Longreach were the capital, we might develop an ethos in government more in tune with Queensland's needs... but that's another story.

Later when I lived in Townsville, I often attended conferences in Bowen. Invariably they were held in seaside locations and there was plenty of alcohol consumed. It was usually warm, and always difficult to get enthusiastic about anything much. In hindsight - Bowen was probably not the right place for serious conferencing.

We also used to stay at Bowen on our annual trip north with children. We generally didn't have time to do much except transit, although I have unearthed old photos of the kids playing in the sand at Horseshoe Bay - so we obviously had a day or two there.

On this trip we decided to stay at Bowen for reasons of nostalgia, and booked a basic unit which fronted the bay. You could walk from your front door to the beach in thirty paces. It was warm, people ambled by at first and last light, and dogs and kids played on the beach. The walls were thin, and the couple next door were amorous and noisy. Somehow it seemed entirely in keeping with the environment.

Bowen was discovered with the shooting of "Australia". This has resulted in an influx of Japanese backpackers. They're generally decorative, spend money, and are probably good for the place. Bowen has an atmosphere of its own - a bit like an old woman - once beautiful - but now looking faded. Generally, it's charming and laid back.