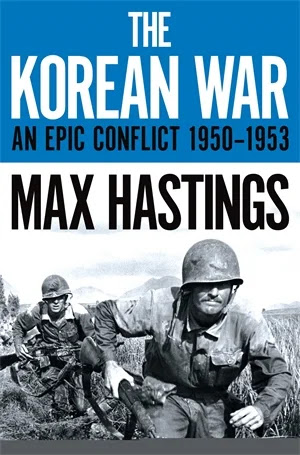 It's been a while since I did a book review, so here's one to compensate that small piece of neglect.

Once you've read one of Hastings' books you've read them all, when it comes to his writing style, but his grasp of both the broad sweep of history and the minutiae of the individual's experience of it is unrivaled.

I guess when you've been writing successfully about war for as long as he has, you've probably mastered the art of contextualising personal experience with epic historical conflict.

He traces the origins of the conflict, the progression of both the UN forces' advances and retreats, and the impact of the conflict on the participants. He provides some interesting and relevant commentary on the connection between the Korean war and events later in other parts of southeast Asia and asks (rhetorically) whether anything was learned from the stalemate in Korea.

My knowledge of the Korean war was pretty sparse, and reading this has put a great deal of the origins of later conflicts in perspective. An understanding of the background of the political atmosphere in the USA, especially as it related to presidential elections is important. It is relevant to note that in February 1952, Truman's approval mark stood at 22 percent. This was the all-time lowest approval mark for a sitting U.S. president, though matched by Richard Nixon in 1974.

He describes the performance of the Eighth Army during the winter of 1950 in a chapter called The Big Bug-Out, in a narrative that put me in mind of the morale of the Americans in Vietnam in 1970, when draftees  (mostly) were fragging their NCOs and officers at an alarming rate.

Hastings interviewed many combatants on both sides, pointing out that he had to take anything he heard from the North Koreans or Chinese with a grain of salt, because of the propaganda involved, but the honesty of many of the British and Americans involved is revealing. Again, there is a thread common to both Vietnam and Korea in that many of the fighting soldiers were honest about their lack of commitment. Many of those involved were conscripts.

President Truman had reinstated the draft in 1948,  and the new Selective Service Act provided for the drafting of men between 19 and 26 for twelve months of active service. In 1950 the Korean War draft called up men between the ages of eighteen-and-a-half and 35 for terms of duty averaging two years. Men who served in World War II did not have to sign up.

The British National Service Scheme also meant that conscripts from the UK fought in Korea, notable amongst them Michael Caine.

Hasting's research is comprehensive and his word portraits of those he interviewed are engaging. He also exhibits a direct and impactful narrative style that maintains the reader's attention.

Do yourself a favour and get a copy, or rock up to your local library.

"Once you've read one of Hastings' books you've read them all, when it comes to his writing style"
Who would have ever thought that one person writing several books uses his own style in each one.
Your crazy analysis is cumbersome and irrelevant Bob.
John Grey

In your own words you ran away from the front line in Vietnam and then ran away from university students in '72 by hiding your wartime record.
Not a record to be proud of Bob.
John Grey

I served with this bloke. He was a good soldier, and certainly never ran away from anything in my experience. You have a colossal hide, putting anonymous shit on a veteran.

Which Anonymous are you, 05042021? Seems as if all sorts of people try to refute information on 1735069's history and character when he is perfectly able to do so himself. There are people using uncommon names that can be said to be in common usage in his own family, an ex-digger, also appears. Now we have an anonymous "I served with this bloke" who could be anyone including the blogger, trying to deflect from the matter using the "leave the old digger alone" defence. The old anonymous witness is the same as no witness at all, sorry.
I am not JG. There is another amazing coincidence...John Grey and Ronald Grey.

"certainly never ran away from anything in my experience"
Bob's own words trumps your experience.
He has written copiously about wrangling a transfer away from the front line and later pretending not to be a returned soldier.
Mate, he's proud of those facts. He is incapable of shame.
John Grey.

There was no front line in Vietnam, and the blogger was reposted partway through his tour as were many riflemen replacing Nashos who had finished their obligation before each battalion completed its tour. You have no idea what you're on about.

Anonymous 08042021 I think you will find "front line" in the Vietnam context means "the pointy end" where the greater risks are encountered, not the trenches.
Some moves away from the business end were as the result of requests and others were as the result of being pushed. I haven't read his story but it sounds as if John Grey may have. JG may have come to his conclusion as a result of 1735069 requesting a pogo job rather than patrolling, if that is what happened.