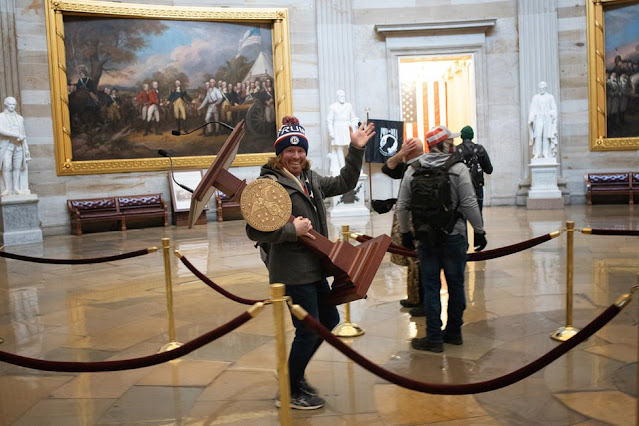 What we witnessed in Washington last Wednesday is an epiphany, a wake-up call..

We saw a mob ransacking the Capitol, after a pep talk from Donald Trump, who had addressed them, urging them to march down Pennsylvania Avenue to prevent the certification of the Biden presidency.

Such an assault hasn't occurred since the war of 1812, but that incident involved British troops, not American citizens.

What has created a situation where American citizens feel that it's OK to attack their seat of government and prevent the democratic business of the day from being conducted?

To understand the origins of this behaviour, which is cultural, rather than political, you need to examine the digital environment surrounding individuals who behave in this way. Whilst many of them are complete lunatics (obvious from the images), many of them aren't. Many of them are otherwise solid citizens who believe they are doing the right thing.

Voltaire is quoted as observing -

He's on the money.

Members of the alt-right and many conservative journalists, spread a conspiracy theory on social media outlets such as 4chan, 8chan and Twitter contained coded messages that connected several high-ranking Democratic Party to child trafficking. A number of pizzerias were named including the Comet Ping Pong pizzeria in Washington.

Then there is the meme claiming that the pandemic is a hoax, or if you don't like that one, that it is a CCP plot.

Then, if we read Qanon or 4Chan, we hear that 5G carries the Covid-19 virus, that lizard people have infiltrated all levels of the US administration (except for Trump of course) and that Pearl harbour and the Oklahoma bombing were false flags operations.

The frightening element of all this is that polling indicates that many of these conspiracies are believed by a significant proportion of Americans.

Absolutely no evidence is presented for these narratives, but that doesn't seem to matter. In any case, even if there is no evidence, an avalanche of blurry videos which are interpreted with no context are substituted.

The most heinous of these memes, and the most dangerous, is the election fraud fantasy. It's heinous because it has been comprehensively debunked by electoral officials (many of them in Republican administrations), dismissed in the courts (often by Trump appointed judges) and the recounts and audits that have been conducted have shown all results are valid.

It is dangerous because as David Kilcullen noted, it has white-anted the trust that many citizens have in their government. This trust is essential for democracy to survive. A few thousand of those citizens marched on the Capitol last Wednesday, and a few hundred broke in, attempted to harm their elected officials, and trashed the building. Some carried zip ties (apparently to kidnap congress members or senators).

But the most significant factor which brought the US to this point is the proliferation of dangerous online garbage. It needs to be cleaned up.That is the challenge for not only the US, but free countries worldwide.

"urging them to march down Pennsylvania Avenue to prevent the certification of the Biden presidency."
When your whole argument is based on this demonstrable lie, the rest of your article makes no sense.
John Grey.

"We saw a mob ransacking the Capitol, after a pep talk from Donald Trump"
Another deliberate lie from the blogger.
The timelines show quite clearly that the crowd was listening to President Trump and didn't have time to get to the break-in.
The break-in was led by Antifa who were already at the Capitol building.

Even that bastion of left wing extremism, Wikipedia, says "Those looking to demonstrate violently were at the Capitol long before Trump ended his speech."
John Grey

"What has created a situation where American citizens feel that it's OK to attack their seat of government and prevent the democratic business of the day from being conducted?"

Probably the same depth of emotion as exhibited by the BLM movement, which has caused violent riots, looting, burning, and destruction in 48 of the 50 major cities in the USA.
John Grey

From President Trump's speech:
"I know that everyone here will soon be marching over to the Capitol building to peacefully and patriotically make your voices heard".
But the blogger perpetuates the communist talking points that he encouraged ransacking and assault.
Biden was referring to the bloggers of the world when he talked about Goebbels' "big lie" methodology.
John Grey

The timelines show quite clearly that the crowd was listening to President Trump and didn't have time to get to the break-in.
Another lie - https://www.nytimes.com/interactive/2021/01/12/us/capitol-mob-timeline.html
The people already at the Capitol were listening and watching Trump's speech on their phones and tablets, and many who were in the crowd at his speech went straight to the Capitol and joined in the incursion.
The break-in was led by Antifa who were already at the Capitol building.
And you know more about what happened than the FBI?
https://www.thenation.com/article/activism/antifa-trump-fbi/
Give me a break.

Probably the same depth of emotion as exhibited by the BLM movement, which has caused violent riots, looting, burning, and destruction in 48 of the 50 major cities in the USA.
The majority (93%) of BLM demonstrations were peaceful, with the exception of a few cities where the disorder was exploited by thugs -
https://time.com/5886348/report-peaceful-protests/
On the other hand, the rioters last Wednesday were intent on kidnapping (some were carrying zip ties), vandalism (offices ransacked), killing (one policeman bludgeoned to death with a fire extinguisher) and worse (two pipe bombs neutralised).

Biden was referring to the bloggers of the world when he talked about Goebbels' "big lie" methodology.
He was referring the current POTUS who began his bid for nomination with one big lie (the Birther narrative) and finished his term in office with another (the election fraud lie).
He has been totally consistent.

Check your own references blogger.
Kilcullen said 1.6 million, not the "thousands' you falsely claim.
John Grey

Kilcullen said 1.6 million, not the "thousands' you falsely claim.
At the 1.44 mark in the video he says "thousands".
At 5.05 he talks about "downtown DC (District of Columbia) not the Capitol.
The figure he quoted, if he means Washington (he said "DC" so it's unclear) is most unlikely.
The city doesn't have the capacity to feed and house that number.
Best estimate is between 10000 and 100000 - https://theconversation.com/it-is-difficult-if-not-impossible-to-estimate-the-size-of-the-crowd-that-stormed-capitol-hill-152889

Using the blogger's brilliant logic, the Capitol riots are minor because only one of them occurred.
C'mon man you can do better than that.
John Grey

There is no need to worry about the internet being cleared up, blogger.
Millions of free speech supporters have already had their accounts deleted, demonetised, and shadow banned.
The dictatorial actions of Big Tech that you favour started some time ago - I'm surprised you missed the action.
You'll be OK. Fawning over the CCP and the Democrats (BIRM) is an allowed topic.
John Grey

Hey ex-digger, are you Maree, Joanne, perhaps the blogger himself seeking to support the blogger's coloured view of matters that he purports to be the truth?

So CNN was at the forefront of the break in to the Capitol building.
As was Antifa.
Makes a mockery of the blogger's claim that it occurred "after a pep talk from Donald Trump."
John Grey.

The blogger does make me laugh.
After months of violent protests, the burning of cities, looting and destruction of honest businesses, he has an epiphany and a wake up call.
A little late mate.
I'm very surprised you missed the occupation of the Capitol building by the screaming-shouting-door banging mobs who violently disagreed with Kavanaugh's nomination to the Supreme Court.

When Trump supporters do it, it’s called an “armed insurrection”.

Wake up to reality.
John Grey

"That is the challenge for not only the US, free but countries worldwide"
Any chance of cleaning up the meaning of this sentence so readers can understand it?
John Grey.

I'm still searching for the blogger's utter condemnation of the violent protests at the 2017 inauguration.
I'll keep posting here while Google peers down its memory hole for the now-censored accounts of black-clad demonstrators with faces covered who destroyed business premises and threw Moltov cocktails at police.
John Grey.

So CNN was at the forefront of the break in to the Capitol building.
As was Antifa.
Both debunked.
https://www.reuters.com/article/uk-factcheck-capitol-mob-antifa-undercov/fact-check-men-who-stormed-capitol-identified-by-reuters-are-not-undercover-antifa-as-posts-claim-idUSKBN29E0QO
And
https://technocodex.com/does-jade-sacker-work-for-cnn/

You should really check your sources before trying to use them to support your biases.
Over a week old and consigned to the rubbish bin by new events.
Did you know that Radical BLM/Antifa professional agitator John E. Sullivan was arrested for his role in the rioting?
Did you know CNN photojournalist Jade Sacker was with Sullivan as they broke into the Capitol building?
Of course you did but you lie by omission and pretend those pro-Antifa rioters were not there.
Your argument is rubbish.
John Grey

"WOW IS THIS THE BEST FILM YOU'VE EVER MADE IN YOUR LIFE!"
BLM/Antifa activist Sullivan to Jade Sacker, CNN photo journalist as they break into the Capitol Building.
Captured live on Sullivan's video.
John Grey

The media's job is to run cover for Antifa and enable their violence.
The blogger's job is to perpetuate those lies.
John Grey

Has the crazy old blogger identified the numbers of people believing the "absurdities" - or is he setting up a straw man argument just to have something to shoot at?
John Grey.

Did you know that Radical BLM/Antifa professional agitator John E. Sullivan was arrested for his role in the rioting?
He is not a member of BLM or Antifa, so I'm unsure of the relevance of this.
(Lex Scott, founder of BLM Utah where Sullivan comes from, told The Utah Tribune on Thursday that Sullivan has never been a member.

Here's an example of "the proliferation of dangerous online garbage".
"I had a dream Trump was on trial for sedition.
And outside the courthouse, a noose was hung from a makeshift scaffold.
The noose was made of recycled Covid masks." A tweet from hysterical anti-trumpet Alec Baldwin.
John Grey

Lex Scott would say that, wouldn't he.
John Grey.

"Such an assault hasn't occurred since the war of 1812,"
Except for the 2017 Inauguration riots, the assault on the Capitol during the Kavanaugh hearings, the violent riots in Portland and other major cities, and the $1 Billion damages bill from the "mostly peaceful" uprisings.
Get your facts right, blogger.
John Grey.

A tweet from hysterical anti-trumpet
It doesn’t matter who tweeted it - it’s garbage.

The assault on the Capitol during the Kavanaugh hearings

They didn’t “storm” the Capitol. A few hundred women blocked an elevator before being arrested and turned away.
That was very different from what happened on Jan 6th.
A small group pounded on the door of the Supreme Court and sang “We shall not be moved” on the steps.
The Supreme Court is some distance from the Capitol.Google maps will set you straight.