A Tale of Two Crises 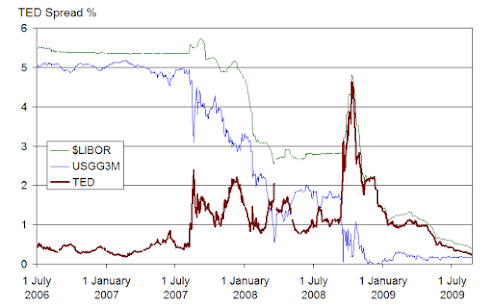 Pic courtesy Wikipedia
Twelve years ago, the global economy fell in a heap.

It's fascinating to examine the origins of these crises, and to look at what governments have done to ameliorate the consequences. Doing so reveals a great deal about our political culture, and the undercurrents lurking beneath the rhetoric rationalising financial management of the issues.

In 2008, the crisis was man-made. In 2020, it's about biology. Back in 2008, the crisis was a consequence of lame and inconsequential regulation of the US money market. The contagion spread offshore, and economies went into free fall all over the globe. Australia was no exception, and the Labor government went fast and hard into stimulatory activity, which was effective in that there was no recession.

The stimulatory measures, especially the BER initiative, had other benefits. these included the construction of thousands of physically accessible additions to school buildings which transformed the school experience of many students with disabilities. For these children living in remote locations serviced with old fashioned inaccessible school buildings, attending school meant moving to a larger centre where purpose built units with wheelchair access were available. The frequent consequence of this was the splitting of families. Usually with the mother moved with the child, and dad stayed with his work and life in the remote community.

The accessible additions which had to meet contemporary access standards, meant the child could go to the local school, and families were reunited.

This initiative, and others, was roundly condemned by the Coalition opposition led by Tony Abbott, as a waste of money, and he was fond of calling it a "debt and deficit disaster".

Suddenly, borrowing and spending is kosher. Whatever happened to the debt and deficit disaster? It seems to have fallen down some kind of memory rabbit hole.

Abbott has fled to the UK without saying a word.

I'm searching for a word to describe this behaviour. "Hypocrisy" springs to mind...

"Abbott has fled to the UK without saying a word."
More bullshit from the blogger's Green political masters.
Lie 1 - "without saying a word": Tony Abbott spoke extensively whilst over in the UK.
Lie 2 - "fled to the UK": he's already back, went into a standard quarantine hotel in Sydney with other passengers, and paid the standard $3000 quarantine hotel bill himself.

If you are not going to tell the truth, at least don't write up such egregious falsehoods that are so easily checked.
John Grey.

You deliberately write in clouds of obfuscation to imply that Tony Abbott was against the benefits to schoolchildren.
As you very well know but won't acknowledge, he was against the cash splash, not the outcomes which could have been achieved in other ways.
John Grey.

"In 2008, the crisis was man-made. In 2020, it's about biology"
Another communist lie.
Governments' reaction to the Chinese Fly has caused the economic crisis and you can't blame a virus for GDP decline, lost jobs, failed businesses, and police state over-reaction.
John Grey.

Dear blogger, the four of us who read your stuff and comment here would like to know what is the gibberish contained in the chart at the top of your article.
Sourced from Wikipedia sends alarm bells ringing to start with. It's got a track record of false information.
John Grey.

The 2008 GFC was caused by Bill Clinton.
Firstly he repealed the Bank Holding Company Act which created banks of mammoth size. These monsters considered themselves too big to fail (i.e. would always be supported by the government) and therefore took too many risks.
Secondly, Clinton decided not to regulate derivatives. As a direct result of Clinton's actions, AIG entered into more than $500 billion of derivative contracts, more than four times as much as AIG itself was worth, without setting aside money to cover possible losses.
Additionally, everyone knows that the roots of the GFC were found in Clinton's drive to increase subprime mortgages which was the shaky ground that caused the whole pack of cards to fall.
John Grey.

Labor's cash splash did not stop the recession, it prolonged the disadvantages of the GFC.
Australia's strong performance during the GFC was due to our small exposure to the US housing market, low rates of sub prime lending, and large resource exports to China.
The BER was a waste of money.
John Grey.

From Australia's foremost economics Professor:
"The belief that public spending is good for growth is the largest fallacy associated with modern macroeconomic theory. Being unable to tell the difference between welfare and wealth creation is possibly Keynes’s most lasting legacy, a legacy which has been poisoning public policy since the 1930s." S Kates, 2014.
He shuts down the BER and Labor very succinctly.
John Grey.

Let me finish your last sentence for you.....
"Hypocrisy" springs to mind...and I'd rather see people destitute than supported by the government."
John Grey.

Well done to President Trump for nominating Amy Coney Barrett to the SCOTUS.
A very intelligent woman who will interpret the Constitution as it was originally intended.
John Grey

Interesting to see the blogger's Catholicism reflected in the woman just nominated by President Trump to SCOTUS. No doubt the blogger will support her.
John Grey

It is snowing on NZ beaches!
So much for global warming.
John Grey.

"The stimulatory measures, especially the BER initiative, had other benefits"
Certainly did. As Ray Hadley pointed out time after time after time, builders contracted to the inefficient Dept of Education made lots of money for bugger all benefits.
John Grey.

If ever there was any question that schools were uses as election year PR fodder, this settles it once and for all:
"SCHOOLS with recently finished BER buildings will be required to hold election year "recognition ceremonies" and invite Bill Shorten to speak." Daily Telegraph, January 2013.
John Grey.

The blogger thinks it is "fascinating" to look at the causes of job losses, business closures, family dislocation, mental anguish, and economic ruin.
What a heard hearted observer of humanity.
Not a sceric of decency in him.
John Grey

"Twelve years ago, the global economy fell in a heap.It's happened again"
Incorrect.
The global economy has been destroyed by government mandated shutdowns. The economy did not fall on its own - it was shoved bu clueless politicians.
John Grey

John Grey, you are an absolute pain in the arse. Most of your posts have nothing to do with the topic and are simply an opportunity to have a go at the blog. You have no idea. I don't know why you are allowed to post.
Ex-digger