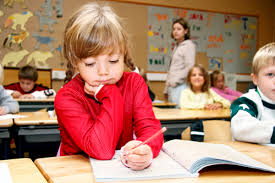 By the end of this year I will have been teaching (or leading teachers and supporting them) for forty-eight years.

That's a long time, admittedly interrupted by bits and pieces such as two years as a Nasho, and four years in Regional administration, but generally speaking, I've worked in schools with kids and teachers and this profession has pretty much been my life. I continue to get a real buzz out of it.

It's interesting to reflect on the waxing and waning of educational trends down through those years. There's been plenty.

When I started as a wet-behind-the-ears First Year teacher (we weren't given the honorific of "graduate" back then) I had a class of forty five sitting in rows, and I was on my own. Teacher Aides hadn't, at that time, been invented. I remember that the job was challenging, but fun. For me, it still is. At least the actual teaching part, that is. The bureaucratic dross that has been added down through the years is less enjoyable.

We taught from a "workbook" which stipulated content. On day 5 of term 2 (for example) work that was set down to be covered was written in detail in the workbook. It was different from day 4, but was pretty much set in stone, irrespective of location, student characteristics and school size. Every school in the state was teaching the same content on that specific day. I can't remember the origin of this curriculum content, but I recall that it came from a syllabus.

Ironically, we've gone full circle in that the "syllabus" is now called the Australian Curriculum, and its content is available on line.

In just about every other aspect of the craft, however (apart from class size) there have been enormous changes - too many to cover here. I will, however, touch on the current obsession with standardised testing. It's known as NAPLAN (called irreverently NAPALM) by some.

It's the politicians' gift to education. Quite obviously, if you aren't sure what to do to improve results (I won't use the word "outcomes") measuring them is probably a safe bet. At least, if you're a politician, it shows that you're "doing something about education".

Actually, you're not. You're doing about as much for improving a team's performance as the crowd at a Broncos/Cowboys match does by watching it. Somebody should tell Wayne Bennett that the performance of his team can be improved by the game's spectators. Standardised testing does however provide great copy for the media. They publish "league tables" and sell a lot of newsprint.

The other downside (apart from the league tables) is the waste of precious time and energy preparing for, and administering the testing regime, and the time it takes out of actual teaching and learning. The subjects that actually enhance quality of life (Music ad the Arts) are languishing.

All this testing and data gathering seems to be making little difference to school performance.

There is one country where standardised testing was abandoned decades ago.

And guess what - their school performance improved exponentially. Now I'm not saying that the improvement is down purely to the lack of standardised testing. It's not.

When I was in the principalship, my school participated in a Queensland study looking at the influence local school management had on school performance. It was supposed to show that if the management of a school's financial and staffing resources was in the hands of the school community instead of the centralised bureaucracy, results would improve.

When this study was done and dusted, it proved that there was a small correlation between management and outcomes, but by far the most significant factor was teaching competence. It had been commissioned by a government that was hoping to use its results to justify a programme they called "Leading Schools". The very expensive study was quietly shelved, never to be cited again. They had to use other justifications.

Going back to my reference to standardised testing, I'm talking about Finland, of course. Take a look at these results -


Ninety-three percent of Finns graduate from academic or vocational high schools, 17.5 percentage points higher than the United States, and 66 percent go on to higher education, the highest rate in the European Union. Yet Finland spends about 30 percent less per student than the United States.

The Finns moved away from highly centralised planning and standardised testing decades ago. Instead they focused their time energy and resources on improving the quality of their teaching force. To teach in Finland, you need a masters qualification. You are a didactition, a concept totally foreign in the USA (and here, as it happens).

Google the word - results come up only in Finnish - yet it's an English word.

There is a waiting list to get into teaching in Finnish universities. Teachers are highly respected and well paid. They also have a strong union. The last characteristic is about the only one that in this country we share with them.

If we want to improve educational standards, lets support the people critical to school performance. Let's pay them what they're worth, improve their status, and understand that teachers shape the future.