The Teaching of Reading 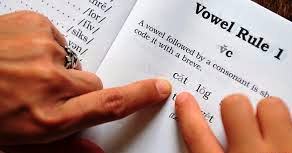 Again or still, the old chestnut about the use of phonics to teach reading is in the news.

I call it an "old chestnut" because it emerges with monotonous regularity. It provides politicians with a narrative which implies that they're "doing something about education".

The regular resurrection of this meme is strange. Anyone who walks into a junior school classroom in 2015 is confronted by a phonics chart (often, these days, the Jolly Phonics programme).

The use of phonics is nothing new and has been a feature of the teaching of reading since I've been in the business (from 1968).

When I started teaching, the reading scheme used was phonics based. After Vietnam, when I went back to the classroom in 1971, that had changed, and the reading schemes had adopted a whole word approach, but I was still using phonics. So were most other teachers. The phonics approach provided useful word attack skills.

The fact that I was teaching kids with Cerebral Palsy by this time, meant that I had to use a range of strategies to help them to learn to read, and phonics was one of them. Most teachers of my acquaintance did exactly the same.

Having said that, kids with Cerebral Palsy often have problems with sequencing, and that particular skill is important when blending phonemes to make whole words. For some of these students, phonics wasn't helpful.

What I'm saying, is that there is no magic bullet when it comes to the teaching of reading (except perhaps the creation of a supportive, organised, disciplined classroom environment). No child will learn anything much without this.

Perhaps if kids are having difficulty learning to read, it may have something to do with readiness. There is a phenomenon called "reading readiness". This means that children need to have mastered some basic competencies before they're ready to decode text.

These competencies include the capacity to recognize and discriminate two dimensional symbols, know what books are for, and hold a book right side up with the spine on the left, front cover showing, recognize that the progression of text is left to right, top to bottom, echo simple text that is read to them, understand that text holds meaning, and be able to tell a basic story.

They also have to have primary language. Reading is, after all, secondary language. No child is ready to learn to read without competence in these skills.

Perhaps these days, early exposure to screens, together with the tendency of parents to over protect by confining their kids to indoors where they don't interact with the physical environment is a factor contributing to motor incompetence, and general lack of perceptual readiness.

When I was a young teacher (back when Adam played second row for the Jerusalem  Knights), I did a post graduate special education course at what is now Griffith Uni. Part of that was a research project involving the development of a reading scheme. The scheme was based on this understanding of the use of primary language skills. The idea was that the text in the scheme would be comprised of the language that children at age six would use all the time.

We had to collect that language by attaching a portable tape recorder to a number of six year-olds for twenty four hours and collecting language samples. These samples were transcribed (a laborious job - kids talk a lot), and words and structures counted and analysed, These words and language structures were used to provide the text for the scheme.

From that, we went on to develop a thesis which later became the successful Mount Gravatt Reading Scheme.

The bottom line is that a variety of methods are needed to teach kids to read. No one method is the magic bullet. Most significantly, politicians should keep out of the issue - generally they have no idea what they're on about.

Would these same pollies dare to express an opinion on diagnostic or surgical techniques as applied to the medical profession?