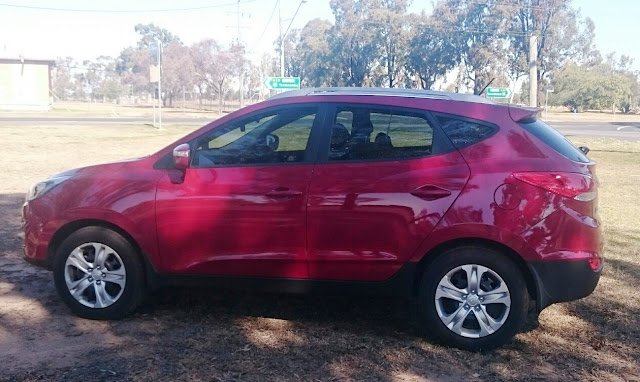 For all you petrol heads out there, it's time for another road test.

The vehicle is an Hyundai ("an" necessary because of the aspirant "h") ix35, which has just been superseded by the weirdly named .

She That Must Be Obeyed (the fleet manager) had originally allocated me a Focus, but its transmission started hiccuping, so the ix35 was hurriedly substituted. This one was bright red, and was the two-wheel drive 2000cc version. They come in 4WD with a 2.4 litre motor as well, but this one pulled well and overtaking was a breeze. It averaged (according to the digital readout) 7.6lit/100km mostly cruising at 100kph on the flat.

I've driven plenty of Hyundais, from the diesel to the i30 and the i45 but this was the first time I've been on board the small SUV. It was, as befits a fleet car, the poverty pack version, called "Active". It had cloth upholstery, steel wheels, and no reversing camera or GPS.

It did, however, have a reasonable sound system together with reliable Bluetooth. Having said that the connection was reliable, I still have no idea how to set it up. I got it working, but have no idea what I did to make it talk to my phone. I never read the manuals - they just confuse me.

Apparently local Hyundais have a locally inspired suspension tuning. It certainly handled sweetly, but I found the ride a bit jittery. This seems to be an Hyundai characteristic, as it reminded me of the i45, which exhibited the same issues.

There was plenty of room, and the driving position was about right for me. The seats weren't wonderful (a bit hard), but I experienced no aches and pains after a couple of three hour stints. I do take a break every one and a half hours, however.

These things are well screwed together, but they smell like nothing I've ever encountered before. This particular example had less than 5000kms on the clock, so still smelt new, but it was not an agreeable pong. I think it was the glue used in interior trim.

If I owned one, I'd be putting a couple of saucers of kitty litter on the floor, and parking it in the sun for a while. This usually removes objectionable pongs.

So apart from the smell, it was an entirely pleasant machine. Hyundais are always good value for money, and there are some great runout deals around on this superseded model. If you're in the market for a handy and easy to drive SUV, check it out.
Posted by 1735099 at 16:47