The term "free speech" is tossed around with gay abandon by the likes of News Limited hacks like Bolt and Blair.

Trying to grasp exactly what they mean when they use it is far from straightforward. In Bolt's case, he seems to believe that he is free to earn a living by enhancing and magnifying conflict.

He also appears to believe that he is free to decide which groups should be demonized, and that no law should be on the books which interferes with his right to make a quick quid for News Limited. Hence his tantrum and threats of resigning from political comment when his employer backed away from appealing the decision brought down under 18C, and his obsession with its removal. He didn't have the cojones to carry out the "no politics" threat. Principle obviously took a back seat to the almighty dollar. That, at least, was consistent.

All of this behavior has its own strange logic - it makes sense. What does not, to me, make any sense at all is his reluctance to allow others the same freedom he demands, specifically, the right to write comments on his blog.

I do this from time to time, but frequently, the posts don't get published. There is an interesting pattern to this. He will not publish anything vaguely critical of his employer. I do it because it amuses me, but also because it shines a light on his warped perspective.

Here, gentle reader, are some examples. I took screen shots of these submissions which were censored - (click on the screenshot to enlarge it) - 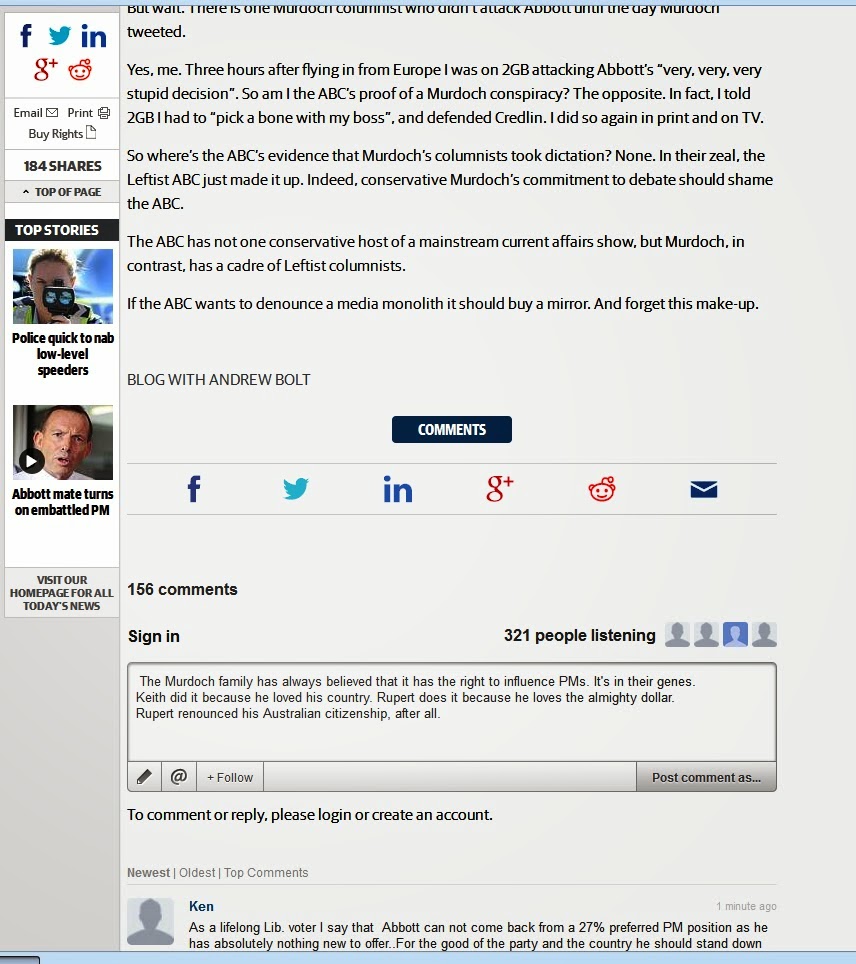 The context of Bolt's post was criticism of ABC bias, a common refrain. The irony of moderating out a comment critical of his own boss is clearly lost on Bolt.

Then there's this one - 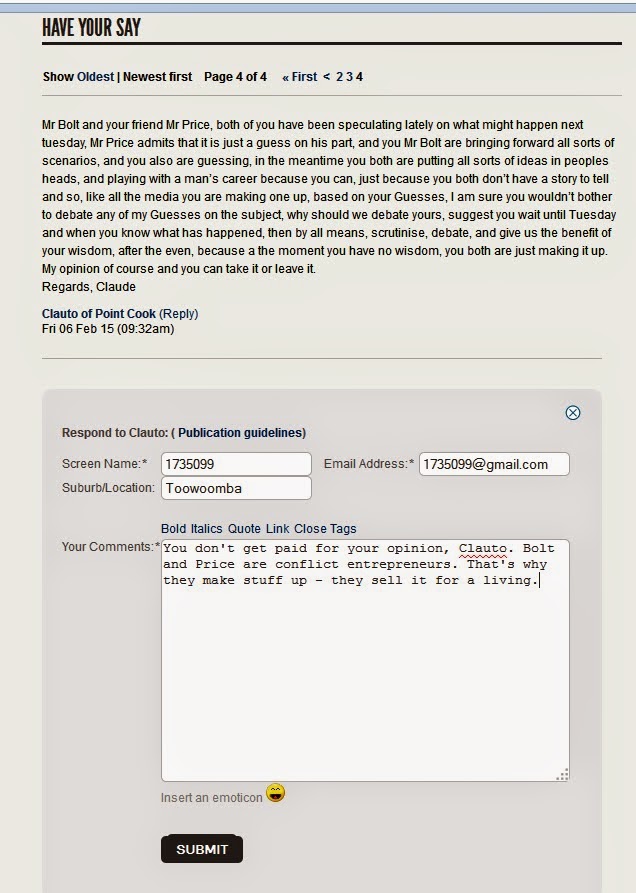 This one was probably censored because of my criticism of Bolt as a conflict entrepreneur. It must be difficult for him - being such a sensitive soul and all, in that a remark made by an a part time amateur blogger is deemed a threat to his reputation.

Again, he will not publish any reference to the fact that he posts hate for a living - 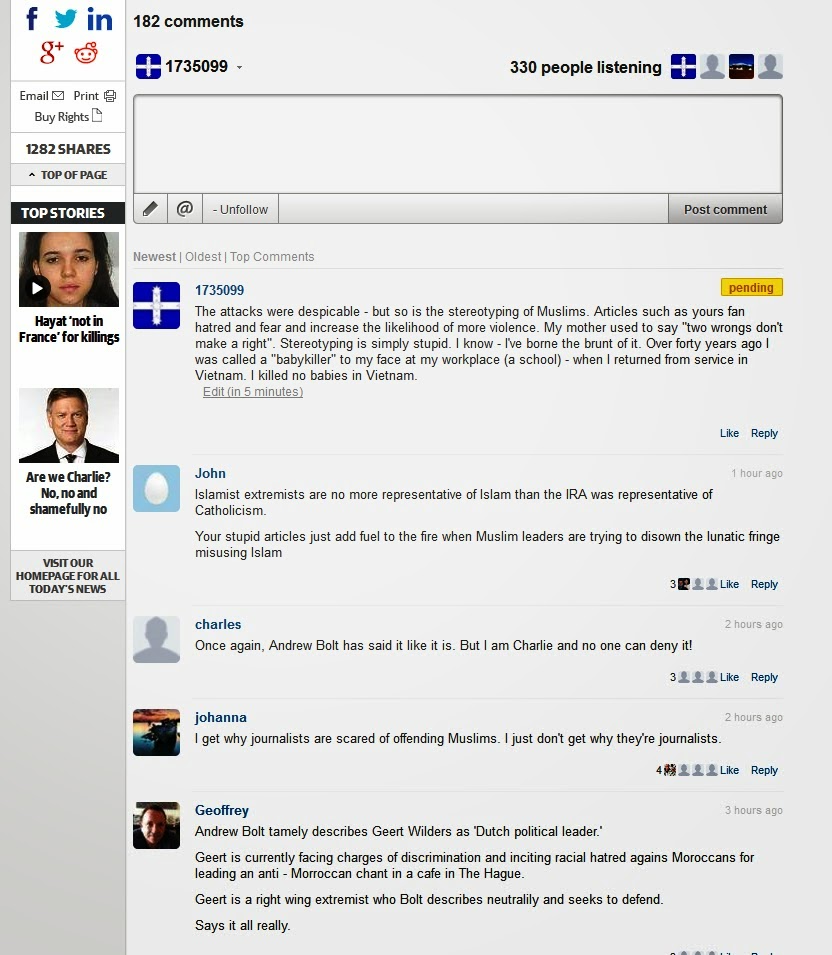 Then there's Blair, the wimp who makes a quid by attacking women.

He simply refuses to post any of my comments, which is a worry, given the declining readership evident on his page. He's lucky to get a dozen or more responses on some of his posts, and they generally come from the usual boganesque suspects.

Like Bolt, he has it in for the ABC - 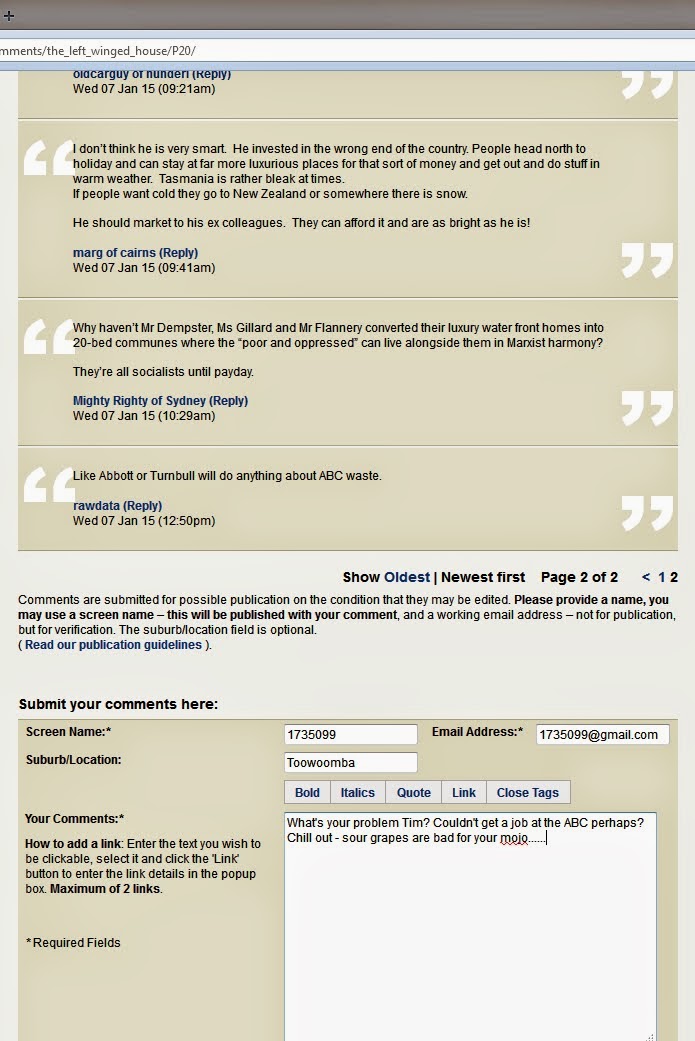 And, like Bolt, he will brook no criticism of his boss - 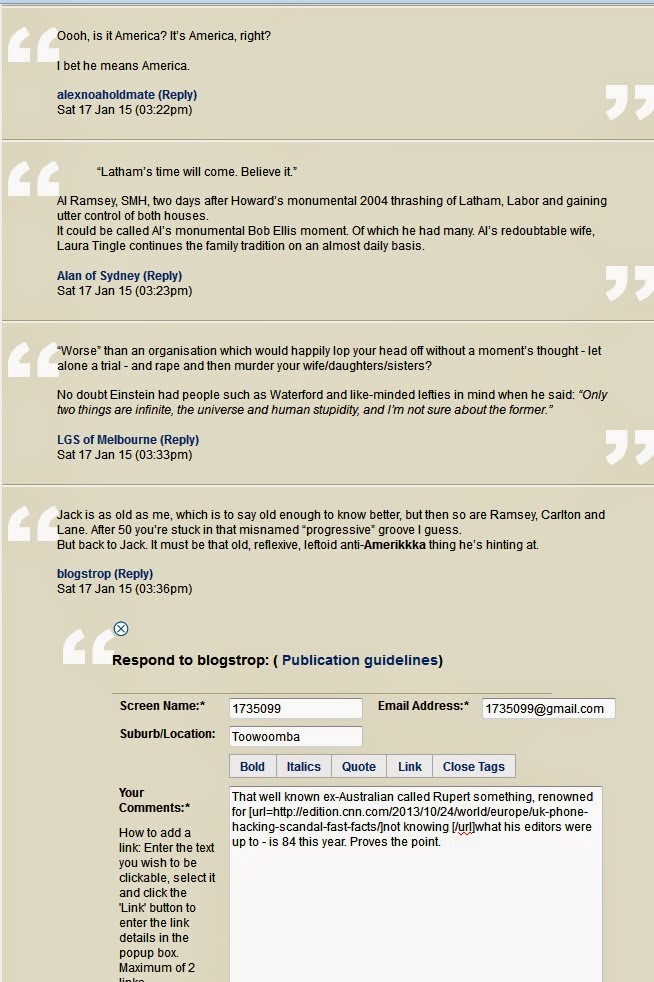 So we have the spectacle of two News Limited employees who are completely wedded to the party line, and when Rupert says "jump", they reply in chorus "How high, and when will I come down".

That is comprehensible, but what I fail to understand is why they are afraid of a humble blogger.
Obviously smearing women and Muslims is far less threatening............

Aren't you guilty of this yourself Bob? Anyway how about Anna's win, bloody some she can't select her own front bench heh?

I've never censored a comment on this blog, so I don't know what you're on about.
Suggest you rephrase your second sentence - it's gibberish.
And who is Anna?
The new Qld Premier has a different moniker.