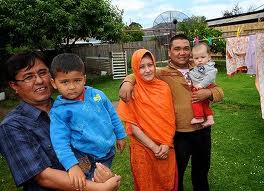 The Daily Telegraph's beat-up lies about asylum seekers in community detention got a run in the national media.

It's only fair then, that the truth of the matter should also get a run. That's why I'm posting this press release from the National Refugee Council of Australia:

The claim by Sydney’s The Daily Telegraph that asylum seekers are receiving furniture welcome packs worth up to $10,000 is untrue, the Refugee Council of Australia (RCOA) says. RCOA chief executive officer Paul Power said people looking to The Daily Telegraph for information were being misled by a classic beat-up in the tradition of the paper’s disgraced former UK stablemate, the News of the World.
“The simple fact of the matter is that some asylum seekers are being detained in furnished houses, as an alternative to locking up children and their families for months or years in secure detention centres,” Mr Power said.
“It is simply untrue to suggest, as The Daily Telegraph has done, that the asylum seekers ‘receive’ the furnishings in the houses where they are being detained, as these furnishings remain in the place of detention when the families are moved out when their detention ends.
“Australia’s community detention system began under the Howard Government in 2005, as a response to community outrage about the indefinite detention of asylum seeker children. This article is tabloid journalism at its worst, with what appears in print bearing little resemblance to reality. Readers of The Daily Telegraph should feel angry that they are being deceived.”
Mr Power said RCOA had long advocated for the end of indefinite mandatory detention, which was a very expensive and extremely damaging approach that was not adopted in any OECD country.
“While community detention is more costly than conditional release into the community, it is far cheaper alternative than leaving asylum seekers locked up in detention centres.
“In 2010-11, keeping asylum seekers locked up in detention centres cost $772 million, an average of $137,317 per detainee.”
Mr Power said the public debate on refugee and asylum seeker policy continued to ignore the reasons why asylum seekers turned to Australia for protection.
“We’re talking about people who have fled tragedy and horror who through no fault of their own happened to live in war zones or countries terrorised by the Taliban.
“Some of us can never comprehend the pain they have endured, of seeing loved ones killed and tortured or the despair of family separation.”
Mr Power said asylum seekers arrived in Australia by boat in search of a level of protection that simply did not exist in their own country or in other countries in the Asia-Pacific region.
“Very few countries in our region are signatories to the Refugee Convention. Countries like Indonesia, Malaysia and Thailand do not extend legal protections to asylum seekers and refugees. Refugees and asylum seekers who work illegally in Asia to support themselves face the risk of arrest and in some instances caning. Faced with no work rights and no schools to send their children, what are the choices? If countries like Malaysia, Indonesia and Thailand can offer legal protection for refugees and asylum seekers, they won’t be forced to undertake dangerous boat journeys to Australia.”
“That is why Australia must continue to engage and encourage countries in our region to bolster protections for refugees and asylum seekers.”
at February 26, 2012

Mate be honest 95% of these 'asylum seekers' are welfare seekers. I would have a complete open border policy however for anyone who comes here, nothing. No welfare, no medicare, no dole nothing from the government for 10 years. I would allow them a lower tax rate in compensation. If private charities chose to assist these people then good for them. I bet that if such a policy was implemented 95% of the 'asylum seekers' here would pack up go home asap.

I couldn't care less what their motives are. If I was in receipt of a TPI pension (and I'm not) you could claim that my motive was greed.
The scandal in all of this is that the refugee issue is played as a political wedge.
On a scale of one to ten it rates about two.