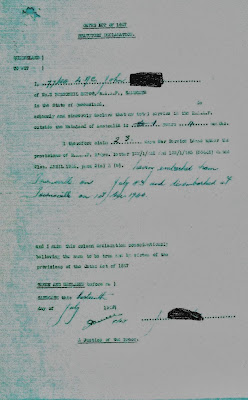 I'm trying to solve a small mystery in relation to my dad's war service.

In the process of building a time line of events during WW2 involving my father and his units, I came across this document. It's very hard to read, but a number of things are obvious.

It's a stat dec. You'll need to click on the image to read it, and then it's still a bit unclear.

Given that dad disembarked for PNG in July 1943, and returned on 1st December 1944, and that it substantiates an entitlement for War Service Leave, a couple of issues emerge.

How can you compete a stat dec for an event that hasn't yet occurred (returning to Australia)? He obviously completed it prior to embarkation.

Were they all organised to do this? Was there so little faith in military records at the time that it was considered necessary?

Were they able to forecast the period of deployment? Given the situation back then, I wouldn't have thought so.