The Bone Man of Kokoda 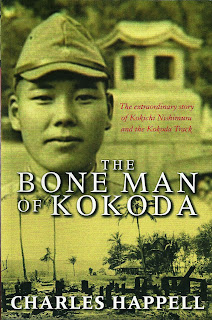 I’ve just finished reading The Bone Man of Kokoda by Charles Happell.
This is one of many books I received for Christmas. It’s time to start my own lending library, even if it’s only to help with storage. One of these days our home will spontaneously explode with the pressure of books stored in a variety of places.
Anyhow, it’s one of those stories that simply shouted to be told.
It’s about a WW2 Japanese soldier named Kokichi Nishimura. This bloke was one of very few survivors of a unit called the 144th Regiment, part of the renowned Nankai Shitai (South Seas Detachment) which was deployed to New Guinea in January 1942.
He was one of very few who survived that brutal campaign which ultimately saw the Japanese defeated as their supply lines were destroyed by the allies. He fought on the Kokoda Track, and was one of the few Japanese survivors of their retreat after forcing the Australians to a point on the track within sight of Port Moresby.
He was repatriated to a field hospital at Giruwa near Buna, after being seriously wounded and suffering from Malaria.
Eventually, after many lucky escapes, including surviving his ship being torpedoed and sunk by an American sub, he returned to Japan in 1945. He was badly injured during the sinking, and was hospitalised again, for months.
He was an old-fashioned warrior, adhering rigidly to values of comradeship and honour, and felt out of place in post war Japan, despite establishing a highly successful manufacturing company, getting married, and raising a family. Ominously, he made a condition of his (arranged) marriage that eventually he would return to Papua New Guinea to find and retrieve the remains of as many members of his old unit as possible.

Nishimura lost his much-loved youngest son in 1966 in an accident, and the author believes that this shock was the catalyst for the extraordinary decisions he made later in life.
In 1979, Nishimura announced to his family that he was going back to New Guinea to keep the promise he’d made to himself and that was a condition of marriage. Despite his wife accepting the condition prior to their marriage, she never anticipated he meant it, and was devastated. This marked the end of the relationship with her and the rest of his children – save for one daughter who stuck with him.
This is where the story gets really bizarre. Nishimura set himself up in Popondetta, New Guinea, building a house and setting up a series of unauthorised memorials over time. He spent years in New Guinea, collecting bones, identifying them, and repatriating them to Japan. At one point he went back to Japan, bought a fishing boat, and sailed it to New Guinea to provide a reliable form of transport along the Eastern coast. The fact that he had never before sailed a boat of any description didn't stop him. He simply took a two-week navigation course, got his master’s ticket, and set sail south.
He was known to return to Japan from time to time, put skulls and bones he’d found in a box, and drive all over Japan, calling on the relatives and descendants of those whose remains he carried to deliver then personally.
He wasn’t always received gracefully.
What makes this story remarkable to me is the resemblance I saw between Nishimura’s determination and that of the team that brought the last Aussies home after the war in Vietnam.
Remarkably, Nishimura started his quest at the age when most are beginning retirement (well over 60). He was a total non-conformist, something very unusual in Japanese culture. At times, he managed to get the governments of both PNG and Japan offside. His unconventional methods caused his old regimental association to disown him, and he completely ignored customs regulations both in Japan and PNG.
The book is comprehensively researched, the prose is clear and eminently readable, and the story amazing.
It’s a great read.
The publisher is Macmillan.
at December 29, 2011

He still now travels to PNG with relatives. Some off my porters saw him at Poppondetta airport around October last year I think. I think he also showed Wayne where Sam Templeton was killed, but I very much doubt this was actually factual, but more of a publicity stunt for Wayne.

The 1942 Kokoda campaign was only four months long, yet it is a battle that has left a lasting impression in Australian history. In this new book, Nicolas Brasch reveals what it was really like on the Kokoda Track and how the Australian troops fought their way through mud and mayhem to victory.