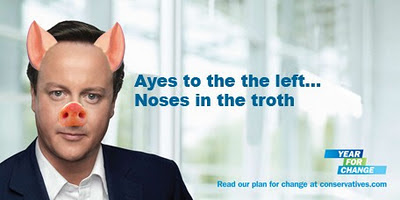 So now the Brits have taken their bat and ball and gone home.
David Cameron’s hissy fit has demonstrated very clearly the core values of the Tories in the UK, and their allegiance to the financial smart arses in the City.
Suddenly the drivers of both the European crisis and its precursor and origin, the GFC are laid bare.
Through Cameron’s reaction, unbridled greed, deregulation and the political power exerted by the big end of town are blatantly obvious. Scratch a Tory, even lightly, and you’ll find an eye for the main chance.
The following comment by a certain John Bruce on the Politics and Policy website puts it well (I’ve bolded a couple of paragraphs. Do yourself a favour and read them twice) -
The EU has the power to legislate in its own interest. We have excluded ourselves from its number in order to 'protect' our banking sector which, bailouts included, has not advanced the cause of civilisation, decency, success or sustainability in the UK since the Big Bang.

Indeed, its greed has so infected the financial life of the UK that it has cost us 40% of the manufacturing Industry which once earnt the country its living. A bank's profit is another's loss. It is an industry which actually 'makes' nothing and facilitates very little - and nothing in absence of extortionate cost.

Not only has its 'fast big buck culture' avoided all investment in manufacturing for export for the last 30 years of decline, but it has done so simply to line its own pockets with never a thought to the reality that it profited at the expense of those it put out of work; those not directly involved in the Financial Services Industry. So save in the bloated City the Country is now in a perilously week condition. Yet none of this was necessary.

It is and has always been perfectly possible to manufacture in the West in successful competition with the Tiger Economies. The Germans have grown and now they own our industrial 'crown jewels'. Toyota, Honda and a host of other firms manufacture in the UK for global export from the UK. Pilkingtons is a huge UK success.

So why have we lost manufacturing for export and the basis of a successful economy? It is easy to blame the Unions of the day - yet today we do have successful manufacturing, so something else has been at work.

In a nutshell 'banking' (and hedge and private equity funds to handle the casino cash) has bred an investment industry which would no more look at any 'front end loaded, long term, slow return investment' than fly to the Moon.
Gone were the 170 years of 3% on investment being an acceptable return on which the industrial revolution was built. What we have come to be all about is 5 years quick in and out with swag of cash - and tough on what's left. So the only successful people in manufacturing have been careful companies with strong enough balance sheets to fully automate when needed to become, or remain competitive.

The terrible thing is that the banking and financial sector 'wealth' has been not creative in any sense, save in impoverishing the pension funds and ordinary investors to whom sub prime and an ever growing pile of 'junk' has been peddled for decades.
Indeed, there is not one ' fund' open to the ordinary citizen that has actually delivered a profit, fees met, tax paid and inflation adjusted, for decades. Indeed, the FSI is an industry whose existence is almost entirely parasitical. And it has near killed its host UKPlc.

The reductio ad absurdum of the position Cameron has now engineered is that, having bet the farm on the City, when, in fact, the regulation comes from Brussels. We have no control. And whatever control we did not have is even less now! - The EU will not now legislate to favour the UK's interests in advance of its own. The enlarged role of the ECB and the acute need for growth in the EU will leach away City activity and with it the only worthwhile products, tax and 1.3 m jobs. Even if the position were that Cameron had got what it was naive to ask for, the realty is that banking is already on the move in shifting its axis East.

The real problem however is this. 55% of our exports that do earn 'Adam Smith' National wealth earnings from abroad, in the continued absence of a sufficiency of which we will default, are to the EU. That market is already under attack from the USA and Far East. By isolating ourselves to protect what is perceived by the other 26 as really rather more than over selfish national interest we have lost purchase in this market place.

The 26, being highly interdependent in the task of recovering out of a collective Sovereign Debt Problem, will act collectively to trade where they can obtain best advantage. That means not simply a lot more production in export replacement, to our disadvantage, but much more trade with China who - given the access - will help financially. Something we can't do.
If you’re a self-funded retiree like me, read the second bolded section.
Occupy Wall Street? - those well meaning bods are far too soft on the Masters of the Universe  - Tarring and feathering is more fitting for the amoral smart arses and maybe a month or two cutting cane at Innisfail in the middle of the wet season, or better still, six months in an Infantry section wandering through old minefields in say, Cambodia.
at December 10, 2011

You're right 1735099. We've always called them the whiz kids, you know the new young brash blokes who know it all. How many millions did they cost Westpac?

They are all now in politics advising the govt and opposition.