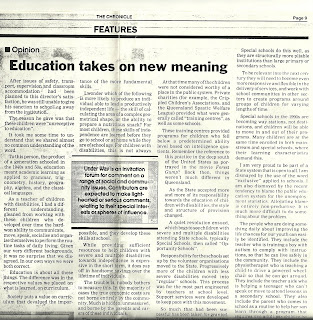 I was having a cleanup the other day and came across an opinion piece I wrote for the local rag, the Toowoomba Chronicle, back in October 1997.

At that time I was the principal of one of the two special schools in town.

It's interesting to look back. The numbers of children in special schools are beginning to rise again, and the corporate emphasis has moved to issues such as NAPLAN.

Some things haven't changed. Excellent work is still being done in these schools. This work - where it brings kids from dependency to Independence saves the community a fortune. It's not recognised because it's not sexy - not edgy.

Many of the issues discussed in this piece will hopefully be addressed by the mooted National Disability Insurance Scheme. Both parties support it, but it remains to be seen whether or not the pollies are simply blowing bi-partsan hot air.

The funds to allow this transition from institutional schools to community schools originated in the Whitlam era.

That is something else lost in the mists of time.

The article is much longer than what I normally post here (1400 words), but stick with it.

It has a happy ending.

I can vividly recall a conversation I had in the mid eighties that helped me clarify my understanding of the word “education”.

In 1986 I was given the task of establishing and opening a new school for children with severe disabilities in a large regional centre in North Queensland.

Almost all the children who were to attend this school were living in a nursing home run by a private charity, and had always attended school-in a building on the premises of their residential.

It was my job to persuade the board of directors of this agency that the children should all attend the new school. On this particular occasion I was trying to convince an eminent (and scholarly) director of the merits of this proposition.

The fact that he always took every opportunity to criticise my grammar whenever I spoke with him wasn’t helpful, nor did it do much for my confidence as a young principal in his first large school. The new school was some five kilometres distant from the nursing home where the children lived and was in the process of construction. After issues of safety, transport, supervision and accommodation had been planned to this director’s satisfaction, he was still unable to give his sanction to schooling away from the institution.

The reason he gave was that these children were “unreceptive to education”. It took me some time to realise that we didn’t share a common understanding of the term.

To this person, the product of a generation schooled in the 1940s and 50s, education meant academic learning as applied to grammar, trigonometry, history, geography, algebra, and the classics.

Given our very different backgrounds, it was no surprise that we disagreed. In our own ways we were both correct. The difference was in the respective values we placed on what is learned, on curriculum.

As a teacher of children with disabilities, I had an understanding gleaned from working hands-on with these children. I had seen them develop over time the hard-won ability to move, communicate, speak, socialise and organise themselves to perform the routine tasks of daily living.

Education is about all these things.

Society is inclined to put a value on curriculum that devalues the importance of the more fundamental and functional skills.

I wonder which of the following is more likely to produce an individual capable of living a productively independent life – the skill of calculating the area of a complex geometrical shape, or the ability to safely prepare a nutritious snack.

For most children these skills of independence are learned before they go to school or at home while they are of school age. For some children with disabilities, this is not always possible, and they have to develop these skills at school.

Although providing sufficient resources to help children with severe and multiple disabilities towards independence is expensive in the short term, it does pay off in handsome savings over the lifetime of the individual. Remember, it costs around seventy thousand dollars per year to provide care for an individual who lacks independence.

The trouble is nobody bothers to measure this. In any case, often the true economic costs are not borne entirely by the community. Much is hidden, unmeasured, and borne by the parents and carers of these individuals.

The preoccupation of economic planners with measurement of corporate inputs and outputs simply fails to recognise the contribution of parents, carers and volunteers.

Because this vital contribution isn’t measured as a financial input, in the world of the corporate managerialist, it doesn’t exist.

Try telling the people providing this care that these hours of toil are a figment of their imaginations. The economic analysis is both half baked and half hearted. It doesn’t take into account the whole picture and the heart has no place in it.

We need only to look back to the early 1960s to get some idea of the progress that has been made in the area of education for children with disabilities.

At that time many of these children were not considered worthy of a place in the public system. Private charities (for example the various Crippled Children's Associations and the Queensland Spastic Welfare League - as it was called then) provided what were generally called "training centres", as well as some schools.

These training centres provided programs for children who fell below a predetermined ability level based on intelligence quotients. Remember the reference to this practice in the deep south of the United States as portrayed in the movie "Forest Gump"? Back then things weren't much different in Queensland.

As the State accepted more and more of its responsibility towards the education of children with disabilities the style and structure of provision changed.

Responsibility for the schools set up by the volunteer organisations moved to the state. Progressively more of the children with less severe disabilities moved into "regular" schools.

This process was for the most part engineered by teachers at school level. I remember it well, beause I was one of them. Support services were slowly and gradually developed to keep pace with this movement. So much that has been successful has been taken for granted.

To develop an understanding of the massive changes that have occurred quietly over time it helps to look at some figures.

In Queensland in 1989, 6624 students with disabilities were receiving programmes of education in special schools and 207 in units. By 1997, that figure had risen to the point where there are more than four times as many of these children in inclusive settings (units, classes attached and regular schools generally) than in special schools.

In 1975, there were 21 special education units operating in Queensland. As this is written, the number is 136.

In a large organisation like Education Queensland, it is important to maintain elements of the activity of the organisation that can solve unique problems in unique ways.

Special schools do this well as they are structurally more pliable institutions than large primary or secondary schools.

To be relevant into the next century they will need to become even more responsive and flexible in the delivery of services, and work with school communities in other sectors to create programs around groups of children for varying lengths of time.

Special schools in the 1990s are becoming way stations, not destinations, and children will be able to move in and out of their programs as they become more socially, physically and intellectually independent. Many children are at the same time enrolled in both mainstream and special schools, when their learning needs and characteristics demand it.

I am very proud to be part of a state system that is open to all. I am dismayed by the use of the word "exclusive" applied to schools. I am also dismayed by the recent tendency to blame the public education system for the unemployment statistics. Allocating blame is entirely non-productive. It is also very easy – and very lazy. It is much more difficult to do something about the problem.

It is easy to identify the people who are doing something daily about improving the life chances for our young people with disabilities. They include the teacher who is training a boy with autism to comply with instructions, so that he can live safely in the community, They include the physiotherapist who is teaching a child to drive a powered wheel chair so that he can get around by himself.

They include the teacher aide who is helping a teenager who can't speak or move to attend lessons in a secondary school. They also include the parent who comes to school as a routine to help her son overcome the massive social anxiety that his autism triggers.

These people, both teachers and parents, but especially parents, require a kind of stubborn valour, as well as all the skill, knowledge, patience and endurance that they can muster. They also need, from the wider community, recognition that their endeavour is enormously productive.

Incidentally, the result of the conversation referred to at the beginning of this article was from my viewpoint, as the founding principal of the new school, very positive.

All the children from the nursing home were attending the new school by the end of the following year (1987). No longer were their lives confined to the grounds of the nursing home and the school on the premises. Like other children, going to school meant travelling some distance.

One of them was a six year old girl who at that time had been given six months to live. As I write this over ten years later, she is thriving and still at school.