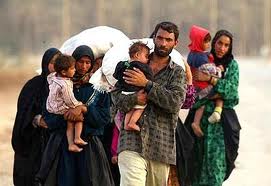 I'm feeling lazy today (officially on holidays) so today I'll post other people's opinions rather than my own.

The first piece is by Paul Dobbyn from last Sunday's Catholic Leader.

"HARSH and unjust" Federal Government and Opposition policies towards asylum seekers have come under attack from representatives of Catholic social justice agencies.
Representatives from Brisbane archdiocese's Catholic Justice and Peace Commission (CJPC), the Australian Catholic Bishops Con-ference (ACBC) and the national St Vincent de Paul Society have also criticised sections of the Australian community for attitudes encouraging these policies.
Long-time advocate for refugees and asylum seekers and former information officer for Mercy Family Services' Romero Centre in Brisbane Frederika Steen has also issued a plea to the Government and all Members of Parliament "to comply with the spirit and the letter of the law - domestic and international - that seeking asylum is legal".
The representatives' criticism came as political debate on the Federal Government's plan to deport asylum seekers to Malaysia intensified with Labor Party factional leaders warning Prime Minister Julia Gillard that any deal must carry the support of the United Nations High Commissioner for Refugees.
It also followed the passing of a parliamentary motion initiated by the Greens which condemned the deal under which 800 asylum seekers would be transferred to Malaysia in exchange for 4000 declared refugees over four years.
The representatives' comments were also a reminder of the celebration of World Refugee Day last Monday (June 20).
CJPC executive officer Peter Arndt said people should heed Pope Benedict XVI's message released on the Church's World Migrant and Refugee Day 2011 earlier this year.
"In his message Pope Benedict said 'welcoming refugees and giving them hospitality is for everyone an imperative gesture of human solidarity'," Mr Arndt said.
The ACBC's Australian Catholic Migrant and Refugee Office (ACMRO) director Scalabrinian Father Maurizio Pettena acknowledged "the policy of sending the next 800 boat arrivals to Malaysia might be a deterrent for further boat arrivals".
"However, this policy cannot be condon-ed; as essentially swapping human life goes against the moral teaching of the Church," he said.
St Vincent de Paul Society national council chief executive officer Dr John Falzon said the organisation "appreciated the Australian Government has a responsibility to protect our borders".
"But this does not give it (the Government) the licence to punish innocent people who are legitimately seeking a place of safety in our country," he said.
Mr Arndt said "there is little evidence that respect for the human dignity of asylum seekers is at the heart of either the Government's or the Opposition's policies".
"Both sides support prolonged, mandatory detention of asylum seekers in isolated centres on mainland Australia and in offshore facilities," he said.
"Both sides have been responsible in government for locking up many children seeking asylum ... and both sides are willing to 'export' asylum seekers to other countries where they are deprived of basic rights and subjected to further danger or harm."
Mr Arndt criticised attitudes in the Australian community which were encouraging these policies.
"Such intolerance and discrimination should not shape Australia's policies on the treatment of asylum seekers and refugees nor should they be accepted by Christians or condoned by their silence," he said.
Fr Pettena said the ACMRO had grave concerns for the welfare of the potential 800 candidates that may be sent to Malaysia "due to the already heavy burden that Malaysia carries".
"Also it is important to remember that people smuggling is merely a symptom of the underlying problem of war, poverty and inequality in the world," he said.
"This underlying problem does not disappear by decreasing boat arrivals to Australia.
"The people-smuggler business model is diminished by increasing Australia's humanitarian intake.
"By providing desperate people with a valid pathway into Australia they do not need to risk their lives on a boat."
Dr Falzon said members of the St Vincent de Paul Society were "deeply troubled both by the Government's Malaysian Solution as well as by the continued detention of children".
"There is no place for such punitive treatment, especially of children, in a progressive society," he said.
"Both Government and Opposition persist in treating asylum seekers as if they are to be blamed for needing to flee their countries.
"We call on the Government to live up to its international obligations and to observe its own 2008 commitment to use detention in an immigration detention centre only as a last resort and for the shortest practicable time and to end the detention of children.
"There are currently 6730 people in immigration detention. This includes 1083 children.
"Mandatory detention, especially of children, continues to be an abuse of human rights."
Ms Steen called for "humanity before politics".
"We can, as a democratic, free nation which respects the rule of law, protect asylum seekers who cross our borders, and fairly and quickly assess their claims for protection from more persecution," she said.
"We do not have to punish them with detention.
"Our nation has benefitted from refugees and immigrants being given a fair go.
"Less than 4000 legal asylum seekers arriving by boat a year is nothing in the context of 300,000 new migrants being allowed to settle some years."

I'd agree with most of that.

In any case, nether the Coalition nor Labor will get my vote whilst they expatriate refugees. It doesn't matter to me whether they're sent to Malaysia or Nauru.