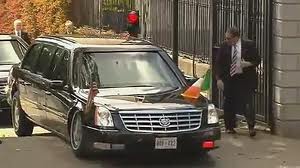 It makes sense somehow - if you're overweight, you need an overweight car.

Obama's obese limo got stuck in Ireland. He's not obese, but a helluva lot of his countrymen and women are. His presidential limo sure is.

Only in America could an obesity epidemic influence the automotive market. It seems that even as fuel prices skyrocket in Yankeeland, people still buy SUVs and the like because they're too big to be comfortable in vehicles that drivers in the rest of the world accept as "right-sized".

I guess if the natural order of things follows here, as it most often does, we'll continue to be saddled with the same lumps of automotive lard that have proliferated across the Pacific.

When you drive something as small as an MX5, it becomes an issue as many of the people driving Toyota Lardcruisers and the like simply don't see you.

One of the situations that often makes me smile is when I'm returning to my parked Mazda to be confronted with a driver (more often than not female) extracting a four-wheel drive from the front end of the parking space it's in, as they thought it was empty.

The diminutive proportions of the MX5 frequently fool them into thinking the space is free, and they are well and truly committed before they wake up. I always keep a straight face.
Posted by 1735099 at 15:26