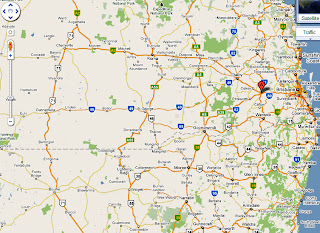 Back then, I was living in Brisbane and had volunteered to be part of a cleanup team that was working in a row of houses which had been completely inundated on Sir Fred Schonell Drive. The odour of the mud and the smell of decay already evident in furniture and linen will stay in my memory for a long time. Wooden houses don't cope well with being covered by water. Everything swells and most internal fittings have to be replaced.
I had cause to remember the situation for reasons other than the smell. After snagging my calf on a hidden rusty nail, I had to head off to casualty for a Tetanus injection. As it turned out, I didn't get Tetanus, but did end up with a nasty local infection. There's a variety of nasty bugs in floodwater.
If you'd like to help the bushies (and the townies) recovering from what has been the worst flood event in a century, log on to the website.
Donations are tax deductible.
Posted by 1735099 at 15:09

There were floods out where we went for Christmas. Spoke to one bloke who had the unenviable job of removing a dead pig from under a house where it had been washed by the flood. It popped as soon as he tried moving it.

I suggested demolishing the house (weatherboard) and building a nicer smelling one a bit further up the block.