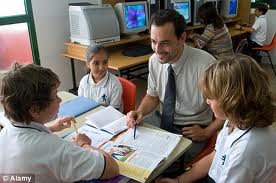 A story in The Catholic Leader got me thinking about the issue of sexual abuse by teachers, or more accurately, the mainstream media's treatment of it. Click on the title for more information.
The possibility that a child could be at risk of abuse from a person in a position of power and respect, such as a teacher, is every parent's worst nightmare.
I have some understanding of the feelings it generates, as one of my daughters was the victim of a sexual assault earlier this year. The offender who lives in a different city was convicted and punished, but I deliberately avoid him, because I could never be sure that I would remain in control if we met.
Putting parental anger aside, I wonder whether there is a connection between the dearth of males in the teaching profession these days, and the media sensationalism around child abuse by teachers.
A quick examination of the statistics reveals that sexual abuse in a school (a cataclysmic betrayal of duty of care), is very rare. Children statistically are in far greater danger of being abused at home than at school, but I guess a headline saying "Twenty Thousand Teachers Didn't Abuse Their Students This Year" wouldn't sell many newspapers.
The case quoted in the Leader is a good illustration. A principal of a Catholic school in Toowoomba was dismissed after he badly mismanaged a case of abuse in his school which led to the teacher being charged, convicted and jailed. The principal reported the abuse to the diocesan authorities, but not to the police.He was sacked, both from the principalship and as a teacher.
Years later, he was given some teaching work (as a casual supply teacher) in another city, and the media reporting of this verged on the hysterical. This person had never abused a student, and there was no reason to believe that he was a risk to children. He was simply a poor manager who made a serious mistake. You would assume that given what he's been through (including his loss of career and reputation) he'd probably be the person least likely to offend in the future.
The article in the Leader was a defence of his casual employment. I think they're about right.
I began teaching in 1968 in a primary school with a staff of ten, six of them being male. These days, the sight of a male in a primary school is comparatively rare. As a principal in the eighties, I remember parents often requesting that their children be assigned to a class with a male teacher. By the time I'd retired after the turn of the millennium, this attitude had turned full circle. Parents (always mothers) were obviously nervous about a male teacher being assigned.
I couldn't find any stats about the percentage of males in teaching positions in Queensland, but these Irish figures are worth a look.
I doubt that the position in this country is much different.
My opinion after forty years in teaching is that there are many kids who need male models at specific periods in their development. Unfortunately many of them come from single parent families, the majority with absent fathers. I believe these kids are at risk of developing anti-social behaviours because they often model themselves on male peers, sometimes in the gang context. I know this is a generalisation, but I could rattle off the names of a whole series of delinquent boys I've encountered who are prime illustrations.
How should the gender balance be restored?
Education Queensland has affirmative action strategies in place designed to even out the ratio of males/females in administrative positions. In practice this means that if a male and female applicant has equal merit for a position, the female should get it.

Why can't a similar approach be used to attract males into the classroom?
Suggestions that scholarships for young men to be trained as teachers should be offered have been rejected as sexist, but perhaps more important issues emerge, such as the future of our boys.
What do you think?
Posted by 1735099 at 14:39

Interesting you should raise the "gang" role model. I saw this ad on a bus last week - it really got up my nose. Disabled kids should aspire to be gangstas?

With all the moral panic around, who would want to be a male teacher in a primary school?

It is a worry. Probably the result of some bureaucratic marketing think tank. Maybe they're targetting the bogans who target kids with disabilities, rather than the kids themselves.

The feminisation of education is almost complete.

This is what women want, and who are we, us mere males, to stand up against them.

Women have the power, and if you are a teacher or a leaker of information even, you will have discovered that some women will misuse that power.