I've always had a soft spot for Caribou.
The aircraft, that is - not the Rangifer tarandus.
It's probably because I've always associated them with getting out of undesirable places - whether it was a bush strip in the Putty Mountains in sleet during a training exercise in July 1969, or travelling from Nui Dat to Ton Son Nhut in November 1970 on my way to a Saigon Guard.
Strangely enough, it wasn't a Caribou that flew me to Saigon to link up with my RTA flight in December 1970. That aircraft was a clapped-out Thai Air Force C-123 pictured here. 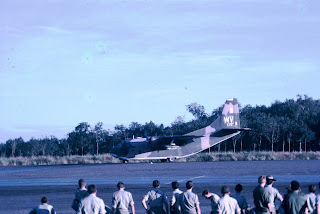 Visiting the Army Aviation museum at Oakey last weekend triggered a few memories about Caribou in particular and military aircraft in general. Again strangely, the last military aircraft I travelled in was a RAAF C-130E during the pilots' strike in 1989.
At that time I was a school principal in Townsville, and booked to Travel on Ansett to a conference in Brisbane. Bob Hawke brought the RAAF in, and the aircraft supplied was a Herc.
My colleagues and I were queuing up with our boarding passes to walk up the cargo ramp when I noticed our position in the queue. If you've ever travelled on a Herc you'll remember that you sit in four rows along rather than across the aircraft. Each of the outside rows has its back to the fuselage. About a third of the way along the aircraft, the undercarriage bays intrude narrowing the fuselage and the people sitting in the outside rows are forced to sit with their knees interlocked with those in the rows opposite.
Given that there weren't any people I would have been happy to share my personal space with for two hours or so, (good-looking women for example), I elected to give up my place, and move back down the queue to ensure a more comfortable flight. I tried to explain what I was doing to my colleagues, but they didn't understand or follow my example. By the time we got to Brisbane, they'd understood.
Anyway, back to Caribou. 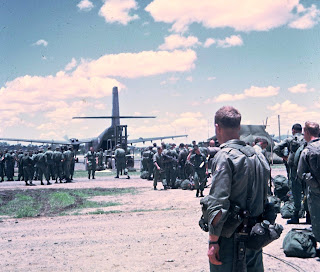 I've dug up a pic I took at Rockhampton airport in 1969 when deployed to Shoalwater bay. The Caribou we flew in is on the tarmac, but I can't remember whether we were going out or coming back.


I have a nerdy habit of noting the buzz numbers of the aircraft I fly in. At Oakey on Sunday, I photographed a Caribou (A4-234). It looked familiar, although it didn't have the Wallaby Airlines logo on the tail. The excellent reference Dakota, Hercules and Caribou by Stewart Wilson shows that 234 was deployed in Vietnam from May 1970 until February 1972, so it's possible that it was the aircraft that took me to my Saigon guard.
One Caribou looks much the same as another, of course, and service aircraft are like grandfather's axe, so who knows if it was or not, and if so how many bits were original. What is confusing is that there were a few aircraft with the Wallaby logo on the tail, but Wilson's book shows that some of them were never in Vietnam. They've all had a few coats of paint since those days, so livery is probably an unreliable indicator of history.
Anyway, flying in a Caribou is a unique experience. They're draughty, but in Vietnam the draughts were a bonus. The big Pratt and Whitneys absolutely bellow on takeoff, and also on reverse pitch on landing. You can't really conduct a conversation, even when cruising. They weren't uncomfortable. 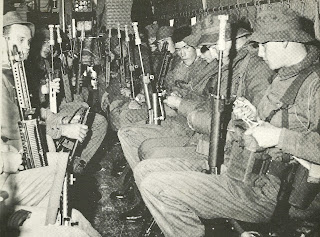 Pictured (courtesy of Seven in Seventy) is a platoon emplaning in a Caribou in July 1969 during a training exercise in the high range area. Note the blank firing devices on the rifles.
They (the aircraft - not the rifles) were an anachronism even when first acquired, because of the piston engines, and maintaining these engines became a major issue towards the end of their service. Parts were like hen's teeth. There was a move in the mid eighties to re-engine them with turboprops, but in the end it came to nothing.
The idea was resurrected again in 1995, but again wasn't pursued.
So there are no more of these old beasts flying in Australia. They were often referred to as "10000 pop-rivets flying in formation".
Posted by 1735099 at 07:42

They are also the only aircraft in the fleet to have suffered a bird strike from behind.....

Apparently a bird flew into the tail one day while it was on the tarmac. Old Ronnie RAAF who saw it was forced to record a bird strike from behind – it had been hit by a bird after all.