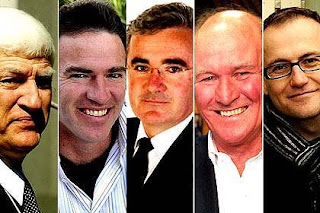 Queenslanders have always been the innovators in national politics.
The manifesto that brought the Australian Labor Party into being was published first in 1892 after the unrest in Barcaldine in 1891. Barcaldine is in Queensland, by the way.
The first Labor government in the world was formed by Andrew Dawson in 1899 in .
The Labor split in 1957 had its genesis in , and this effectively kept Labor in opposition for decades.
And now, a first term Labor government has been booted out, essentially by Queenslanders, and for the first time since 1940 it looks like we'll have a minority government.
Frankly, I can sense a sea-change in the electorate.  Out of optimism, I sense the possibility that voters are simply fed up with adversarial politics.
The system was not designed with two-party competition in mind. The idea was that constituents elected a representative (that's why they're called MHR - for heaven's sake!) who debated and eventually made laws on the floor of the chamber. It was meant to refine and clarify legislation which was, in the end, the product of careful deliberation by the members.
Parties weren't seen as part of the deal - they developed. Some would say they grew out of the natural division between the haves and the have-nots - and this was certainly the case way back in colonial times.
Fast-forward to campaign 2010, and voters saw a campaign that was based purely on adversarial politics and was bereft of leadership, vision, and any policies of substance.
Unsurprisingly, voters - especially in , reacted negatively to this, and we're left nationally with a simple message from the electorate - "a pox on both your houses".
Some of the details are fascinating.
Tony Abbott declared that 400000 more people voted for the Coalition. What he didn't point out was that this is a lower number than those who voted informal (618000). He also failed to remember that we have a preferential system, the same system that allowed the Coalition to stay in power by courting the old whore (the DLP) for a very long time. The wailing and gnashing of teeth about the Greens preferencing Labor completely neglects the history. It was OK for the Coalition back then, but apparently not OK for Labor now. Whichever way you cut it; neither the Coalition nor Labor has a mandate to govern.
If you accept the old paradigm, the country has moved left. The Greens are the big winners.
Belting a first term government is not unprecedented. Howard lost 19 seats at the end of his first term, but clung on to power.
Let's consider the future -
The independents have the whip hand now. Bob Katter is interesting. He is about survival in the bush, he advocates broadband in rural and remote areas, and has not forgotten the privatising of Telstra and deregulation of the dairy industry. Southern commentators consider him a bit of a joke. They do so at their peril.
He is a bit hard to categorise. His Mt Isa office (I haven't been there in years) had pictures of Ted Theodore and Jack McEwen on the wall. His dad, (Bob Katter Senior) before he was the National Party member for Kennedy for 24 years, was an ALP member and a Union organiser on the wharves until the 1957 Labor split. His Lebanese Catholic heritage had lots to do with that.
Katter's split with the National Party was particularly acrimonious, and they have not forgiven him. There is no love lost between Katter and Joyce (and Truss for that matter), and you can't assume that he'll support the Coalition. I knew him in Mt Isa back in the mid nineties. I'd see him at Mass every Sunday, and he'd occasionally come into my office under his big white hat, advocating for his constituents. My work back then was with kids with disabilities and Aboriginal kids, and Bob advocated strongly for both. He really does put his electorate first, and believes that the bush has been sold out by the National Party. I don't think it was very smart of Warren Truss to insult him on National TV during the election telecast. The Coalition needs him more than he needs them at the moment.
Barnaby Joyce was slagging off at Tony Windsor on the same telecast - not smart.
Commentators from Sydney and Melbourne don't have a clue about (or  for that matter). Their view of the world is blinkered by the fact that they live and work in these two cities, and they really don't understand rural or regional priorities.
This disregard by both the commentators and the party apparatchiks of anywhere outside the South East has come home to roost. The future of the country is in the hands of four (maybe five depending on the count in Denison) independents from regional .Denison, of course, is in Tasmania, which was left off the map by the Australian in its electoral washup. Typical.
And it looks like the end of Iron Bar Tuckey.
How sweet it is!
Posted by 1735099 at 07:49

You can take Wilke's picture down. Labor's won it.

Oakeshott may well support Labor and with the other two hating the Nationals....

And it's also certain that no one on the east coast understands WA at all. "Bloody eastern staters" sums up their attitude pretty well.

Absolutely spot on! The nat's chickens are coming home to roost with katter, Windsor and the bush.

I read where a commentator suggested that if any of these three sided with Labor they would be booted out by their own electorate next election.

If their electorates had wanted labor, they would have voted Labor.

A valid point I would suggest.