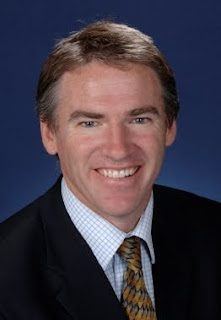 This has to be the best outline of the solution to the current impasse that I've heard.

He's taking about bipartisan cooperation. This would turn our political scene on its head and take a blender to the blue team/red team bullshit that we've been stuck with for so long.
At last someone in politics is shown to be capable of lateral thinking. He also understands the basis of our system of government - a rare thing in our elected representatives these days.
It would have other effects - such as denying oxygen from the Churnalists who make a pretty comfortable living from barracking on the sidelines of adversarial politics.
Australia would be a better place were it to come about.
I doubt it will happen - greed, lust for power and celebrity, and plain old closed mindedness will probably rule it out.
This bloke is a Republican - and his views on this and a few other branding issues show that he is capable of straddling the political fence with the future of his country, as well as his electorate in mind.
And of course, people would need to pause and reflect - unlikely.
Posted by 1735099 at 10:00