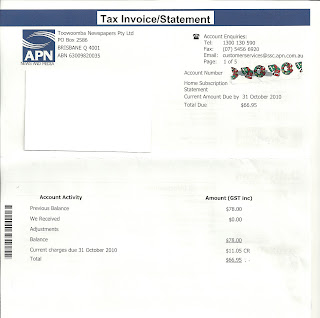 We get the local paper (the "Toowoomba Chronicle") delivered. God knows why, it has to be one of the worst rags around.
My bride likes the crosswords.
This has been the case ever since we lived in Toowoomba. We've been here 14 years now, and at some point during that period, the organisation responsible for delivering the paper and sending us invoices changed.
Sure, the paper landed in the front yard routinely at about 5am, wrapped in plastic that usually defied bleary early morning attempts to unroll it, but the person throwing it with dubious accuracy was no longer our local newsagent.
Apparently he/she/it was a contractor employed organised by some anonymous crew across the Tasman. The local newsagent no longer had anything to do with it. When we moved here we organised delivery through this newsagent.
How this change came about without our knowledge is passing strange. In my naïveté, I assumed that if you had come to an arrangement with a business to provide you with an ongoing service, it couldn't be changed our terminated without consent of both parties. We've led pretty busy lives, but I'm not so far advanced in my dotage that I'd forget changing this arrangement.
But I digress.
Earlier this year I received a demand notice with a threat of legal action from the company (I won't name them, but if you look closely at the picture, you can come to your own conclusions) on the grounds that we hadn't paid our bill.
Going carefully back through the invoices and my on-line payments, it became quickly apparent that this wasn't the case, and we were indeed up to date. I didn't think much of it - honest mistake perhaps? I phoned their 1300 number and was told to ignore the correspondence. No apology was forthcoming from the operator who apparently was located in Auckland.
Problem was, about one month later the same thing happened again. I phoned again, but received such abrupt treatment that I asked that no more deliveries be made.
I then went to our local newsagent, discovered that he was still delivering, and asked him to resume the service from July 19th. He had no knowledge of how the change came about, except to say that he bought the business 10 years ago, and the deliveries may have been sold to this Kiwi mob separately. His deliveries cost fractionally more, but I'd prefer to support a local small business over a multi-national any day.
This, I thought, would be the end of the problem.
Not so, another bill arrived from the multi-national. This was peculiar to say the least, as the arrangement had been terminated and we were getting one paper delivered - not two.
I phoned the brusque Kiwi again (although it's obviously a call-centre I seem always to get the same person). The explanation was fascinating. She said their "accounts were a little behind". It turns out that they actually owe us money ($11.05).
I defy anyone reading the invoice to come to any conclusion other than that we owed them $66.95.
If I had been silly (or busy) enough to pay up, I'd assume that I wouldn't have been any the wiser, based on past performances.
The moral of the story? This particular multi-national is either price-gouging, inefficient, or a bunch of shonks - perhaps all three.
I'm not holding my breath for the refund.
.
Posted by 1735099 at 11:06