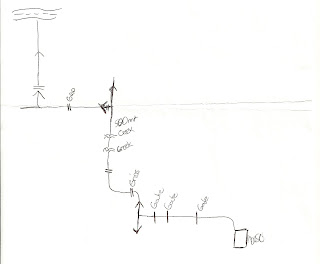 This has been a great week so far, with the first three days spent working west.
Just getting away from all the pre-election hype and spin has been a relief.
I'm working at the moment with the family of a little girl who live on their cattle property about 400 km west of here. Their nearest neighbour is 5 km away, the nearest small settlement 40 km to the east, and the nearest town of any substance is about 100km west. Access to the property is via a four-wheel drive track which is impassable after a few showers.
I've posted the mud map the little girl's mum sent me to make sure I didn't get lost when I visited their home. Like everything else this mother does, she draws a good map. I didn't get lost.
This child is four years old, and has undiagnosed condition which makes caring for her a 24 hour proposition. She has seizures which are dangerous if there isn't someone with her when it happens, and it can happen at any time.
She spent the first 18 months of life in hospital, and since she has been at home with her family, her mum has had one break away from her for a few weeks when she (the mum) fell ill and had to be hospitalised.
Her house has been turned into what can only be described as a therapy centre for the child. No expense and time has been spared by her parents in giving this little girl the absolute best chance of securing a good quality of life.
I can't begin to describe the courage, endurance and resourcefulness shown by the family. They're bushies of course - and don't see what they're doing as anything special.
The situation confounds the health and education bureaucracies. Their highly centralised rules and regulations weren't set up to deal with supporting a child in these circumstances. The accountants who set up this stuff know the cost of everything, but the value of nothing. Much of what needs to be done requires cooperation between a range of agencies - some government, some not - and they seem to find difficulty in working outside their corporate silos.
I sometimes find it hard to be civil when told why something can't be done because it doesn't meet guidelines. I can see battles ahead in setting up a school programme for this little one. These same guidelines are usually thought up by someone who hasn't been west of the divide. BSBs* is what they're known as out this way.
Whilst I enjoy this work immensely, I'd probably still be doing it even if I didn't,  simply because of the inspirational effect of working with parents like these.
It's humbling.
* Bastards from .
Posted by 1735099 at 06:59

A few years back, I worked in a section that had about 150 staff. Of those, a handful were based in the country, and the rest in the CBD. Of the 145 or so that worked in the city, I was the only one who ever, ever went out into the shrubbery on extended trips to find out what the f*ck was going on. That went on for about 5 years, until I left. Not one person that I worked with would ever saddle up and hit the road for a week, seeing what went on west of the Dividing Range.

I used to have some ding-dong battles when I got back. People in Sydney, who had never been in the field, thought they knew better than some bloke in the field 600km away. Their arrogance was breathtaking. Their stupidity was mindblowing.

That experience turned me into a total advocate for decentralisation and localised decision making. Yes, there were some idiots out west, but none of them were as dangerous or stupid or out of touch as the desk jockeys back in Sydney.

You're right about the negative results of centralisation. It's not only the location of the staff that matters. It's structural. The people with the power to lead and manage are those who control the money, and they're invariably in central office these days.
No matter how good the local manager is, if he/she lacks the power to use the financial resources of the agency to come up with effective local solutions, nothing will improve.
Some of it is down to organisations becoming risk-averse because they're scared of the plaintiff lawyers.
Some of it is down to investing taxpayers' dollars in the short term money market.
It breeds apparatchiks who wouldn't recognise leadership if it bit them on the bum. The same trend is ruining our political parties.