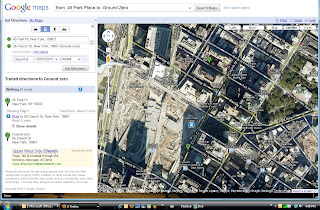 There's been lots blogged and written recently about the proposed building of a mosque at Ground Zero in New York.

Even my old mate Andrew Blot has got in on the act.
On first impressions, it seems a pretty insensitive thing to do. The right wing blogosphere has gone completely ballistic. Mind you, that's nothing new.
Let's dig a little bit deeper. In the first place - where exactly are they planning to build it? Enlarge the map. The address is 45 - 47 Park Place Manhattan (A). The Address of Ground Zero (B) is bounded by Vessey St to the North, Liberty St to the South, Church St to the East, and the West Side Highway (logically) to the West.
If you use the New York trip planner to work out how to get from one place to another, you'll note that it takes a good five minutes. The two locations are adjacent, but this thing is not going to be built at Ground Zero.
So it's close, but it's not appropriating sacred ground.
So what's the problem? It's largely symbolic of course. Funny thing about symbols - their meaning exists purely in the human imagination. You can look at this building in one of two ways - either as a symbol of reconciliation and tolerance, or as a terrorist group posturing about their monstrous behaviour.
There is a slight - very slight possibility - that some good may come of the first interpretation.  The second interpretation leads to further conflict and sorrow.
I attended a service for Vietnam Veterans' day this morning. One of the guest speakers was a young woman talking about Dr Bob Hall (ex-8 RAR) and his research team from UNSW@ADFA identifying from our military records the burial sites of 3700 VC/PAVN soldiers killed in action against Australian troops.
This is also symbolism.
It sends  a simple message that what unites us is much more significant than what divides us.
Posted by 1735099 at 17:33

I think they got the timing wrong - it probably wouldn't be such a problem in 15-20 years time, when wounds have had time to heal. What Dr Bob is doing is good, but I don't think he started his work in 1970 when we were still in a shooting war with the VC. I don't remember too many Japanese restaurants opening in Hawaii in 1944.

Well I guess we have to be tolerant of the intolerant.

1. Well done Dr Bob.
Gives me a grid reference I can go and piss on the NVA graves if I ever decide to go back there.

"if I ever decide to go back there"
Do it - you might learn something. You'd have to change your tag of course.
"sites they conquer"
By that reasoning, the Catholics have conquered Baria-Vung Tau province, based on the profileration of Catholic churches and shrines built there in the last 20 years.
The building in New York is not a mosque, by the way.

Just asking - but didn't the original cross erected at Long Tan go walkabout after we left? I figure you old buggers will know more about that than me.

BOAB
6RAR put up a concrete cross, but I'm not sure exactly when. I have a feeling it might have been on their next tour. Someone out there will know.
This was removed after the fall of Saigon by the government of Vietnam but was replaced (again, I'm not sure when) by a replica. The original is displayed in a museum (at Dong Nai, from memory).
For my 2006 visit we had to collect the brass plaque and hang it on the cross when we held our small commemoration. The province authorities appeared respectful of how the site is valued by Australians, and were very helpful, although there was a small charge to borrow the plaque. They provided a guide.
An old school mate of mine was killed in the first few minutes of the battle. He had been marched in to 6RAR as a reinforcement about two hours before it all started. I was chatting to his mum and sister last Sunday here (Toowoomba) at the service. He was a Helidon lad.
Early in my tour, we set out on our second Op from there, after being trucked out from the Dat. We had a brew on the site and then walked in overnight to our AO.

Some quick checking has shown that 6RAR put the first cross up on 18th August 1969 - during their next tour.