Of Multinationals, Mining and Madness 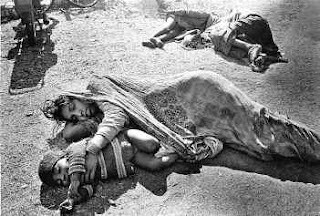 About 26 years ago, a leak of toxic chemicals at in , resulted in the deaths of between 2000 and 3000 people.
The precise cause of the accident is disputed, but there is general agreement that poor maintenance after the plant ceased production in the early 1980s was contributory. Allegations of sabotage were never proved.
Three were failures of several safety systems (due to poor maintenance and regulations) and evidence that these same safety systems were switched off to save money, including a tank refrigeration system which alone would have prevented the disaster.
More recently, in April this year, the Deepwater Horizon spill has surpassed in volume the 1989 Exxon Valdez incident.

I blame the whizzkids.

You know, those professionals who are credentialed but not experienced and think they know everything

They are stuffing it up everywhere.

In NSW the top Education boss used to be a principal. If principals were dissatisfied with something they'd ring him up - he was well known and respected.

The top guy in Education is a convicted drug dealer! Nobody else could get a job anywhere in the organisation with a background like that!

Today we have managers who are put there by govts to do their beckoning. In the process the culture of the organsiation gets stuffed.

It happens in Health, Police and most govt departments. No experienced people at the top.

I saw on TV that some guy from BP wanted to keep production going even tough all advice was of a safety nature to shut down because it was too dangerous.. I wonder if he still has his job or have they given him the golden handshake of a few million to go off and wreak havoc somewhere else.

Money talks. The rest of us can only listen

Cav
True. My younger brother (a very competent accountant) was headhunted to become DDG Ed Qld back in 2002. He was in this job for about seven years, and then moved sideways at the same level into another department when he disagreed with someone senior on a matter of principle.
Once SES level is reached, and contracts signed, merit and morals go out the window, and influence, power, and favours owned become the currency of choice.
It has destroyed the culture of what used to be a frank and fearless public service.