Yesterday was December 1oth, the anniversary of my return to Australia (RTA) in 1970. My habit has been to post a story from my tour on this day.

The last time I did this it met with a furious reaction from someone who didn't like my attitude. Let's see what happens with this post.

The pic was taken at a company harbour at about this time. Pictured are the Company OC, our CSM and my platoon commander. We were waiting to be choppered to a new AO. It was stinking hot and dry - a bit like it is here now. 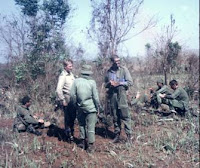 I’m not sure of the origin of the phrase “friendly fire”, but I’d be surprised if it wasn’t coined by the US military. The euphemism aligns well with other phrases such as “VC suspects”, used regularly at the famous Five O’Clock Follies. The American military seemed to have a talent for creating interesting euphemisms. These days we hear about “collateral damage”.

There were a number of Friendly Fire incidents during the Australian involvement in Vietnam, and some unfortunate diggers weren’t lucky enough to survive them. Early in our tour, misdirected mortars from an Australian unit hit some diggers in our battalion. We were almost as likely to be shot up by Kiwis or other Australian units as we were by the Yanks. Friendly fire was a major problem in Vietnam due to the nature of the conflict. The jungle, the lack of a defined front line, and the variety and inexperience of many of the units were all contributing factors.

From our perspective, the Americans seemed to follow the principle that if you shot off enough ordinance in the general direction of where you thought the enemy might be, you stood a good chance of hitting something. We were trained to seek targets if at all possible. Perhaps the difference in approach was an indication of the resources we had to spare. Ammunition was expensive.

We heard talk of the Yank harbour drill – supposedly every soldier fired off a magazine of whatever he was carrying at the time to his immediate front, once the platoon was harboured.

This activity, called “the mad minute”, was supposed to clean up anything and anybody near the harbour. Our belief was that it cleaned up a few wild pigs and other assorted wildlife, at the same time letting every VC within ten klics know exactly where the platoon was for the night. I didn’t have personal experience of this phenomenon, but the stories persisted. It probably had some basis in fact, although there were some very good US units.

We probably should not, as a company, have been surprised by close encounters with stray American ordinance, given an incident very early in the tour. During our first couple of weeks in-country we were taken on a “firepower demonstration”. This was a common experience for newly arrived infantry soldiers and was intended to make us feel secure as we became aware of the firepower that supported us. We were marched to an area on the edge of the Nui Dat base; where we settled down to watch what sounded to me like a glorified fireworks demonstration, except that it was in broad daylight.

Loudspeakers were set up and were patched into the air-ground communications net, so that we could hear the conversations between the forward controllers and the pilots. We were in a very good position to pick up exactly what was going on. The whole unit was assembled and all ranks were present, so the occasion, which must have cost a lot of money, was obviously considered very important.

Initially, we were treated to a demonstration of mortar fire, then artillery (our own and the New Zealanders). This was reassuring, as it was accurate and obviously very professional. It was also an impressive show, setting off a lot of dust and smoke. The area was very dry, and some secondary fires were started, something that was to become a problem for us later on our first operation.

The next part of the demonstration consisted of air-delivered ordinance. First up, the RAAF Canberras demonstrated their technique of low-speed, medium-level bombing using high explosive bombs.

Again, this was impressive, as they were very accurate and, by the look of the explosions, very effective. Next we were to watch some USAF F-100 fighter-bombers let loose some Napalm.

They came in from our left, very high and very fast. The bombs tumbled away from the aircraft and exploded with a whooshing noise and enormous clouds of black smoke. The only problem was that they fell almost 500 metres from the designated target area. In fact, they were so far off target, that one of the pilots could be heard panicking over the radio (broadcast so we all could hear), asking whether there were any “friendlies” in the area.

We never did discover the reason for the lack of accuracy, but the diggers on their second tour didn’t seem at all surprised. This left me with a very poor regard for the USAF and a determination to make sure, if possible, to be well dug-in, if there was any chance that they were being called in to “help” us. As it happened, when we did strike bunkers, the F-100s once again were inaccurate, but fortunately all they damaged was a lot of scrub.

But getting back to the “friendly fire” incident that involved my section –
We had been patrolling for some time towards the end of our first major operation, and it had been quiet. We had traveled a couple of klics in hot weather and at a fairly rapid pace, and were moving as a company. Six platoon was in the lead, we (5 platoon) followed, and 4 platoon was bringing up the rear. We were in single file, so were strung out across a wide area. The country was abandoned paddy, interspersed with clumps of bamboo and low vegetation.

The abandoned paddy was essentially bare, as the soil seemed poor, and very hard. I discovered only recently that there was a high iron content in the soil, something which became very significant in the light of what followed.

I was fulfilling my usual role of recording paces on my sheep counter and relaying the count to the skipper (who was one section up the line) when requested. I was second to last in the platoon, followed only by our tail end Charlie.

Suddenly, all hell broke loose. Somebody opened up on us from behind with what sounded like a heavy machine gun (although at that point if you had told me it was an elephant gun firing on full auto, I would have believed you). Rounds were whipping past my ears, and the vegetation, such as it was, was being chopped to bits. Before I had digested any of this, I found myself on the ground, pack abandoned, pointing in the general direction of the rear, where the rounds had apparently come from. I felt exposed, as in this particular area, there wasn't much cover of substance. Over the pounding of my heart, and my rasping breath, I could hear yelling. Some of it was coming from the direction of our tail-end Charlie, and the rest from the general direction of platoon HQ, further up the line.

Our tail-end Charlie was saying that he was hit, and someone in platoon HQ was yelling "Contact" into the radio. The firing, after this short initial burst of about twenty rounds, had stopped. Then I heard my section commander's voice asking the tail-end Charlie if he was OK. He replied "Yes, but I'm hit bad".

This didn't seem to make sense. In fact, my brain was desperately trying to understand the situation, and wasn't really getting anywhere. I didn't have long to wait. I heard the skipper yell "It's 4 platoon – don't fire", and it all began to fall into place. I also saw our section commander moving cautiously with his head down past me towards our tail-end Charlie, who, it turned out had been hit on the end of his nose, which had been removed. He was a very lucky digger. He was OK, but was bleeding profusely from what was left of his nose.

First aid was applied, in the shape of a field dressing across his face, and "Dustoff" (a "Possum" chopper) arrived very quickly. He boarded it as an ambulant casualty, and was last seen sitting beside the pilot holding the dressing to his nose.

It had quickly become apparent that we had been fired on by the gunner in the lead section of 4 platoon. Both 4 and 5 platoon reported a simultaneous contact, and Company HQ was fortunately on the ball, recognising "friendly fire" immediately.

Once the adrenaline had subsided, I began to think about what had happened. Two things bothered me. One was how close those rounds of M60 had been when they whizzed past my ears, and how random was the result. The other was how we came to be fired upon by our own people. The second issue bothered me more than somewhat, because wasn't I, with my trusty sheep counter, personally responsible for one vital aspect of navigation, distance covered? Wasn't the cause of this incident a misunderstanding of our position in relation to that of 4 platoon? We were supposed to be separated by at least 400 metres, and we had obviously been a lot closer than that.

I heard nothing more from the skipper, so understood that I was not being held responsible. By this time we were at the point of harbouring for the night. It was dusk, sentries were called in, and we stood to for a while. For the first time in this operation, we dug shell scrapes. It was amazing how twenty rounds of M60 whizzing by at close proximity reinforced our collective sense of vulnerability.

I’ve learned a great truth about “friendly fire”. The term has a particular irony for anyone on the receiving end. I can assure you that it feels anything but friendly.

In the last few years (over thirty-five since the incident), I've also discovered something else. I researched and read the after action report. It claimed that enemy had been seen, and this was given as the reason for the fire. As one who was there, I strongly doubt this interpretation, although I can understand why it was recorded as the official explanation. Obviously, no enquiry is necessary if a "friendly" has been wounded – however slightly – by "overshoot". It saves paperwork.

The other revelation came in conversation with my platoon commander in 2008. He told me that the iron content of the soil in this particular area rendered compasses almost useless. My distance recording was not the factor that cost the unfortunate digger his nose. This was comforting, even if I learned about it thirty-eight years after the event.
Posted by 1735099 at 10:06

Hackworth described the "mad minute" quite effectively in "About face". It was originally a Korean War tactic, and it seemed to be quite useful in that static setting with well defined and entrenched lines. He liked doing it because it rotated old ammunition.

Like many things, I guess they continued to apply old tactics even though the Vietnam War was quite different.

I have a book around here somewhere by an Australian platoon commander in Vietnam who described another "friendly" incident. One digger was creased on the scrotum, another hit in the head. One lived, the other didn't. Same situation - the rear platoon opened up on the one in front.

Good story.
I wonder if people pick up that you were on the ground before you even realised - a combination of training and survival instinct.

It it were a film you'd be yelling 'incoming'.