The Tyranny of Time and Distance 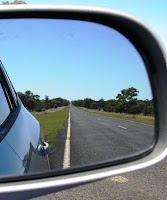 Tomorrow I head west on a journey that will take me nearly 2000km by the time I get back on Thursday.

This is not my preference – it’s happened because the charter flight I was supposed to be using to get me to Cunnamulla was cancelled due to “equipment failure”. I hasten to add that the “equipment” referred to is not the aircraft – but some form of complicated medical equipment that must have succumbed to the record-breaking 45 degree temperatures that have been experienced for the last couple of weeks.

The doc can’t ply his trade without the requisite gear – his patients will have to go east.

I hope that my 60 plus year-old physical equipment is up to the task. Generally, I cope with these conditions pretty well as long as I drink plenty of water and keep an eye on my exposed skin. I have an area on the right side of my face covered in keratoses which used to flare up after such a trip until I understood the problem. The external rear view mirror reflects the eastern sun on my face as I head west in the morning. The solution is to cover this area with 30+ sunscreen and renew it regularly. Covering my hands with Uveto gauntlets also helps.

The heat itself doesn’t bother me. It’s a dry heat which isn’t as uncomfortable as the coastal humidity, but if you’re out in the direct sun, it can be pretty taxing. A big hat helps, and comfortable clothing is as must. The people who settled this country must have been tough – especially the women, when you consider what they used to wear.

The conditions in the schools I work in are generally pretty comfortable, because of a rule made years ago which determined that west and north of a certain latitude, evaporative air conditioners would be installed in schools. They are, but not all of them work according to specifications. This can make maintaining concentration tough at times.

So here’s hoping for a return to normal November temperatures in the Warrego and Maranoa next week, and that all the macropods are dozing in the shade when I pass through. The vehicle I’m using (Mitsubishi Outlander) is already showing the scars of a roo strike.

Good luck on the drive. Having traveled that road many time myself I have great sympathy.

Many, many times I wished I was in a Cessna rather than a Falcon.

Are they still growing garlic on the edge of the Warrego? And there was a bloke out that way who started table grape growing while I was there. Oddly just tonight I was gazing at a bottle of date wine that I bought 15 years ago from the date farm at Eulo. I shudder a little in remembering the after-effects from it and I am too afraid to open it now!

Grendel
They still grow dates at Eulo, but I haven't seen any garlic except (rarely) in stir fries in pubs which are often on the menu, but not often ordered. Steaks are the go. The further west you go the bigger they get.
And you can get a decent coffee in St George, Roma and Charleville - not Cunnamulla yet.
Maybe the date wine has improved with age.

Nice to know the coffee scene is picking up - Cunnamulla Cafe were using the steam wand on the espresso machine to make gravy in the 1990's. . .