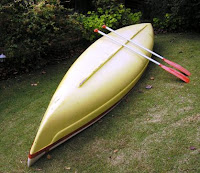 As the kids have moved out, they’ve left their gear behind.

There are four of them, so that’s a lot of gear. The funny thing is, they don’t seem at all interested in making decisions about what should become of these abandoned symbols of childhood.

We could be mean, and simply disappear the stuff – Vinnie’s, the Sallies, etc beckon. But that would be a bit harsh. I’m sure that guerrilla tactics in the end will win out. For example, I simply load one or two bulky items each time I visit, and make the announcement “I thought you might be missing this”, upon arrival.

This works with most things, and so far I have not been told to backload anything. There are some things that fail this method, however. You can’t use it when trying to get rid of a model dinosaur collection when it belongs to a twenty-four year old male. Even suggesting that it might be useful for when he has children cuts no ice at all.

We have a canoe, which is probably owned collectively by all my children, given that they had most use of it. I bought it back in 1982 from a manufacturer in Townsville, where we were living at the time. Back then we had no kids.

It was bought, I guess, as therapy, to help my wife and I recover from the loss of our firstborn in March of that year. She would have been 27 this year. Canoeing and wine-tasting were both great therapy.

Nothing concentrates the mind more thoroughly than navigating rapids with the threat of wet gear and scrapes and bruises if something goes awry – even on the relatively placid Burdekin. We did a number of three day trips, always downstream, which meant easy paddling. Canoeing, besides being good therapy, is a great test of a relationship. If you’re stoushing with your partner in a two-person canoe you go round in circles. In later years, I used canoeing as a method of encouraging cooperative behaviour in delinquent kids. It worked.

So this 18 foot* Canadian has been taking up space for many years. Last week I was working at a school so far west that the next school out was in the Northern Territory. I noticed a brace of canoes behind the school, and discovered through chatting with the principal that they were borrowed. I explained that if he had a way of getting my old Canadian out there, it was the school’s property.

One of the parents runs a carrying business, and she offered to freight it out the 700kms next time they had a job along the Warrego. So I cleaned the Redbacks out of it today, and it’s waiting to be collected. Seeing it go will be a bit of a wrench, as it symbolises a significant chapter in our family history, but my wife and offspring don’t mind, and the bush kids will put it to good use.

Ironically enough there’s good canoeing country out there on the desert’s edge.

You think you have problems with your kid's stuff?

My parents finally did a clean out last week, which involved sorting through an entire garage of stuff belonging to my brother. He is 50, and has built a house big enough for 3 families, and he still has junk piled up at home.

For years, my parents have threatened to move into a one bedroom flat - that being the only way to encourage us to collect or throw out our junk.

Canoes are metric by mass, but not by length or width.

Ok I made that up - nice job finding a way to move that further inland!

Hey 1735099, shift!
We seem to do that every couple of years, that way you cull.
But gee we still seem to have a lot of crap.
Cav
http://cav.bigblog.com.au/blog.do