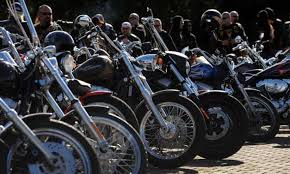 Pic Courtesy The Guardian
Sunday was interesting.
It was my sister's 70th, and she was celebrating with extended family in a resort out of town.
So we could catch up with her, my bride and I arranged to meet her and BIL at a country pub for lunch on their way back from the resort.  It also meant we were able to take advantage of some interesting roads out that way. These things demand to be driven.
The pub was empty except for about half a dozen blokes with big lumpy and shiny bikes, tatts, and leather embossed with club insignia.
There was nobody else in the lounge except the four of us and these guys. They were obviously having some kind of semi-official club meeting.
It's ill-mannered to listen in to others' conversations, but on this occasion, we didn't have much choice. The beer flowed - the conversation at the other table (interspersed with lots of profanity and colourful descriptions) rumbled on and we ate our lunch as we listened. It was, to say the least, entertaining.
They were discussing ways of increasing and maintaining club membership, which, by the sound of it, was declining. I remember thinking that they were having much the same problems as were other enthusiasts' groups, as the demographic aged, and machines like bikes and sports cars are no longer seen as engaging by Millenials.
I did harbour some suggestions but decided to keep them to myself. Discretion, after all, is the better part of valour. Besides, my bride wasn't keen on getting involved. This may have had something to do with the fact that besides my sister and her, the only other female on the premises was the middle-aged woman behind the bar.
What really surprised me was the continual references being made to "inclusion" and "participation". These terms are used more often by social justice warriors than bikies.
We left before they had resolved anything. The biggest issue seemed to be organising working bees to renovate the clubhouse.
I was thinking that they should employ a stripper or two, and perhaps some jelly wrestling after a day's work on the renovations.
I shared that thought with my bride but she didn't think it was a good idea.
Comments closed.
Posted by 1735099 at 08:50

Bikies are people too.

"Bikies are people too"...some are, some aren't.

You pick the most boring topics in the world to write about.
John Grey

You keep reading them :-)

What really happened was that a group of office workers who ride classic bikes together on the weekends had an intelligent discussion about club membership.
They were rudely characterised by Bob as fearsome bikies so he could demonstrate his "courage" to his reader. The misleading photo is used to bolster Bob's false claims.
John Grey

Bob, are the strippers and jelly wrestling part of your Vietnam experience too?
John Grey

No, but I did encounter them at a few Young Liberal parties back in the day.

Strippers and jelly wrestlers, John? No he was straight into the hookers in Taipei on R and R. Not bad for a first timer.

No he was straight into the hookers in Taipei on R and R.
You need to read my book.
I have never been anywhere near Taipei.

You're a bit of a naive dipshit if you believe that the blogger's behaviour on leave in country was any different from 80% of infantry soldiers at the time. He's just honest about it.
Ex-Digger

"he was straight into the hookers in Taipei on R and R."
No wonder he allowed himself to be:
a) called up
b) sent overseas.
It wasn't just the repeat benefits he was after.
Still, STDs must be a bugger.
John Grey

"He's just honest about it."
Were the 80% using under age prostitutes too?
John Grey

What kind of idiot are you - John Grey?
Read the blogger's book and you will discover that he did R & R in Bangkok, not Taipei and that girls working as prostitutes in Thailand had to carry ID which showed their age, and which the blogger checked, finding her to be 19. Sounds like you're some kind of sick pervert.
Ex-Digger

Don't worry about it, old mate.
I allow him to post for giggles.
He delivers every time.

Have to admit I haven't read the book, but I had heard about you losing your virginity to a working girl and knew from memory it was in one of the Asian cities chosen for you by the yanks. I don't about the id thing but if anyone thinks they were for real I have a bridge for sale. One thing for sure a good percentage of lads did avail themselves of the service of the guides. When you are not sure whether you will see next week and you have a couple of days R in C or R and R there are some things you must try out. According to the blogger's numbers about 80% tried out the guides. Anyone who points the finger at them should be ashamed.

but I had heard about you losing your virginity to a working girl
Wow!
I'd love to know where you heard that. 🤣

"When you are not sure whether you will see next week"
How is folding blankets dangerous?
John Grey

"Wow!
I'd love to know where you heard that."
Really can't recall, but the first place you showed up on my radar was on "Kev Gilletts sheet.
I haven't read the book, trust me.