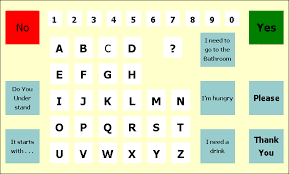 We've been hearing a great deal lately, dear reader, from some who want to repeal clause 18c of the 1975 Racial Discrimination Act.

You'll have to excuse my cynicism about this issue, because I firmly believe that much of it is a reaction to a transfer of power. This power is being slowly removed from those who have held on to it for years, to those for whom having any kind of clout is a relative novelty.

It puts me in mind of a seventeen year old lad with cerebral palsy that I taught back in the seventies.He was smart with a great brain, but had no speech. Despite his inability to communicate conventionally, he had learned to write text using a head pointer on the keys of an electric typewriter, which was state of the art in those days.

One of my more resourceful teaching colleagues developed a method of making communication boards out of plywood overlaid with perplex, edged with beading used in the internal trim of motor vehicles of the day.

He set up a board for this lad, using a qwerty keyboard layout.

That layout was chosen because he was already familiar with it from his successful use of the electric typewriter. To "speak", he would touch each letter in turn with the pointer of his headpiece, and his communication partner would read what he was spelling. He became very fluent with it.

He became so fluent, in fact, that you had to concentrate hard to keep up with him. One of the techniques that helped speed the process, was for the person being spoken to verbalising what he thought was being spelled out as they went along - a kind of precursor to predictive text.

This lad had fairly active life, and he was out and about a lot in his powered wheelchair. This brought him into contact with a full range of people.

As he began to become more and more facile with his board, he asked me to get my colleague to make an addition to it. He wanted the words "Fuck off!" pasted on the reverse side of the board.

When I recovered from my initial surprise at the unconventional approach to alternative communication, the simple brilliance of his idea became apparent. Because that form of communication was frowned upon in polite circles (school for example), the text needed to be hidden. Placing it on the reverse side of the board accomplished that.

My colleague suggested that a text box with the words "Turn my board over" be added to the topside of the board to avoid a lengthy spelling session, and this was added.

I only ever saw him use this feature once when I was with him (on a school excursion to the museum). A bunch of students from a private school which will remain nameless was also visiting the museum. A couple of them were surreptitiously making fun of some of the unusual arm and head movements that were part and parcel of athetosis, the subset of cerebral palsy that was part of this lad's condition.

Normally, I would have intervened when I saw this happening, but held back this time. He asked for the board to be flipped, and used the special request. It very quickly had the desired effect, and humiliated, they left him alone after that.

He had successfully exercised his power of free speech.

I've learned after forty five years working with one particular dis-empowered group that when they're given the wherewithal to push back, it is often resented.