The Return of Auntie Jack 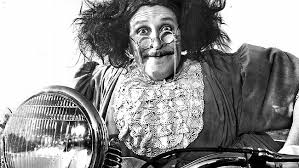 Pauline Hanson, that is.

And like Auntie Jack, most of what she represents, or claims to represent, is fantasy. Our Pauline is largely a figment of her own imagination.

The problem is we have not had leaders with the foresight or the intestinal fortitude to cast aside political correctness. They have failed to discard old treaties and agreements that are not in our best interest and have signed new ones giving away our sovereignty, rights, jobs and democracy. Their push for globalization, economic rationalism, free trade and ethnic diversity has seen our country’s decline. This is due to foreign takeover of our land and assets, out-of-control debt, failing infrastructure, high unemployment or underemployment and the destruction of our farming sector. Indiscriminate immigration and aggressive multiculturalism have caused crime to escalate and trust and social cohesion to decline. Too many Australians are afraid to walk alone at night in their neighborhoods. Too many of us live in fear of terrorism.

So there we have it - neatly summarized.

One Nation rejects the twenty-first century. The “evils” listed are all artifacts of twenty first century life. It’s apparent that Hanson simply does not understand that change is part of life, and change has occurred, and will continue to do so. It’s called progress. The improvements in life expectancy, health, and quality of life are all evidence of this progress, but Hanson and her followers have very short attention spans. In Australia we currently have one of the world’s strongest economies.

The economic reforms of the 1980s and 1990s opened the country to globalization. We benefited from this, and even if we wanted to go back, we couldn’t, unless you believe that “stop the world, we want to get off” is a possibility.

To say that these reforms have harmed the Australian economy is simply nonsense. Economic data (“facts”, in other words), shows that Australia has experienced unprecedented economic growth and stability.

On my first speech in 1996 I said we were in danger of being swamped by Asians. This was not said out of disrespect for Asians but was meant as a slap in the face to both the Liberal and Labor governments who opened the floodgates to immigration, targeting cultures purely for the vote…

This is a well-worn meme which has inhabited the minds of the ignorant for a long time. The trouble is that it has absolutely no basis in fact. No discernible ethnic voting trend has ever been documented in this country. Any political party that relied on the assumption that individuals of any specific ethnic background would vote one way or another purely on the basis of race or origin would have a short shelf life in this country. I challenge Hanson to produce evidence for her contention.

Australia is predominantly a Christian country, but our government is secular.

To quote Wikipedia – “In an optional question on the 2011 Census, 61.1% of the Australian population declared some variety of Christianity. Historically the percentage has been far higher and the religious landscape of Australia is changing and diversifying. Also in 2011, 22.3% of Australians stated "no religion" and a further 9.4% chose not to answer the question. The remaining population is a diverse group which includes Buddhists (2.5%), Muslims (2.2%), Hindus (1.3%) and Jews (0.5%).”

So whilst Hanson is correct to say that Australians are predominantly Christian (or identify as such in a census), the trend is rapidly changing, and that “predominance” stands at a relatively low 11%. Her bête noire, Islam, constitutes 2.5% of the population. Once again, she has dumbed down the fact to suit her version of reality. The narrative being sold is of a uniformly Christian country under threat from other creeds, especially Islam. It doesn’t bear close scrutiny.

She has a habit of making observations as facts –

Why then has Islam and its teachings had such an impact on Australia like no other religion?

Taking this literally, we’d have to accept that no other religion in our country’s history has had such an impact as Islam. This is arrant nonsense. The “impact” she is probably referring to relies on media beat-ups about terrorism. The perpetrators usually claim an affiliation with Islam, because the kind of reaction favored by Hanson gets them the result they seek. She is doing their bidding, but is too thick to understand.

I’d have to think very hard to come up with any “impact” of Islam on my life, unless it was my kids telling me about visiting mosques when they were at school, or the reality of having to go through security at airports.

She continues to get stuck into Muslims –

Muslims are imprisoned at almost three times the average rate. The rate of unemployed and public dependency is two to three times greater than the national average.

There are a couple of observations to be made about this. One is that indigenous Australians are imprisoned at a much higher rate than anyone, including Muslims, yet that didn’t get a mention. I guess that Hanson has been there and done that – remember her maiden speech as the member for Oxley in 1996?

I note that she quotes no reference for these figures. The ABS doesn’t publish a breakdown of prison populations by religion. A study looking at prisoners on the basis of country of birth is worth looking at.

As for welfare dependency, the most rapidly growing group is aged pensioners not Muslim immigrants.

I can only guess at why this has been ignored by Hanson. Could it have anything to do with the fact that she knows the senior demographic is her support base?

She makes this statement about reaction to terrorism –

The grand mufti and other Muslim leaders are deafening with their silence, or lack of sympathy

Which is, put simply. a blatant lie

There are many examples of this, all completely either unknown or treated with disregard as far as Hanson is concerned.

But Hanson ignores all this. It doesn’t fit her narrative, which reminds me of a line in the Simon and Garfunkel hit “The Boxer” –

A man hears what he wants to hear, and disregards the rest

Halal certification is not a religious requirement but a moneymaking racket, and certification is unnecessary for Muslims’ welfare because non-halal products can be consumed, provided the word “Bismillah” is said over the food and a prayer is recited.

Apart from the fact that she has absolutely no understanding of the notion of symbolic sacrifice (raised as a Catholic who doesn’t eat meat on Friday during Lent I reckon I do), she (or her advisers) can’t read the Quran.

The reference to being allowed to eat non-halal specifies the unavailability of other food, and a prayer is said in acknowledgement. Hanson’s interpretation sounds something like the witches in Macbeth.
Given the length of her monologue, it took some time for me to find something she said which was factual. I worked hard, and found it –

Burqas are not a religious requirement

She’s right! The wearing of the Burqa is cultural, not religious, Mind you, if she had pointed out that (for example) FGM and honour killings are also cultural, and not tenants of Islam, that would have been consistent. But consistency is not a characteristic of One Nation doctrine.

By the way, you can’t get a driver’s license in any Australian state unless you can furnish a photograph of your uncovered face. If you don’t believe me, try it.

High immigration is only beneficial to multinationals, banks and big business, seeking a larger market while everyday Australians suffer from this massive intake.

Spoken by the inhabitant of a country that would not exist without “high immigration”, this statement is bizarre. Obviously she believes that the all institutions in this country have been taken over by dark forces intent on destroying “everyday Australians”.

Then, of course, our Productivity Commission (an independent body) has found that migration has had a net positive impact on the economy, bringing new workers and new consumers to Australia, and lowering the country's average age.

Towards the end of her speech she meanders off into conspiracy theory. In Hanson’s binary world, all the evil in the world is queuing up against “everyday Australians” and she is their only hope. Her narrative reminds me of a pre-adolescent view of the world that most of us grew out of by the end of primary school.

To have someone with this infantile mindset occupying the senate benches is truly frightening.

Maybe Shakespeare was prescient -
What's here? the portrait of a blinking idiot,


Presenting me a schedule! I will read it.

Make sure you take Shakespeare's advice and read her speech. It provides a very clear picture of the deluded perceptions she sells. I'm not sure what the bard would have made of it.