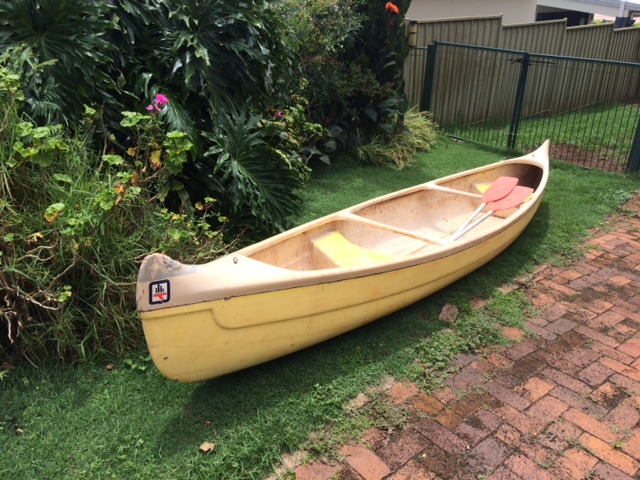 On Sunday we farewelled an old friend.
It was our 18 foot* Canadian canoe that has been in our family since 1982.
If it could talk, it would have a few tales to tell.
It could talk about a three day trip down the Burdekin in 1982, when we camped on sand islands midstream, nearly got cleaned by trigger happy roo shooters, and shot rapids near Macrossan.
This was shortly after we had lost our first child, a daughter through stillbirth. The journey helped our grieving.
It could talk about fishing with my two sons on Lake Julius near Mt Isa in 1993. We car topped it in on my 1970 Peugeot 404, much to the surprise of a couple of four wheel drive owners who had believed that the track was inaccessible to conventional vehicles.
The Peugeot could never be described as "conventional". Large wheels, high ground clearance, and a traction hungry rear end meant it managed the rocky track OK. We did loose an exhaust, which meant a noisy trip home. I refitted it easily, with stronger clamps when we got back to the Isa.
We caught no fish, and got lost only once.
It could talk about an expedition to the beach, at Bluewater near Townsville, when our mad blue heeler was intent on "rescuing" anyone who she saw on board. The results were scratched skin, and a very agitated heeler.
She got the hang of it after a while, and understood that it was safe. She would then stand at the prow, wearing a grin nearly as broad as the canoe.
It could tell the story of a trip down the Black river, north of Townsville. This was not a success. There was barely enough water, so plenty of portage was necessary. In addition, there were sandflies. I had always suspected I was allergic to the saltwater sandflies, and this trip confirmed it. Over two hundred bites led to blood poisoning and a trip to the doc.
When we moved down South, the canoe came with us. It was always a bit of a problem for the removalists. Somehow it got lost, and came via Clermont, about a month after all our other goods and chattels.
In Toowoomba, I took it out on Cooby Dam in a fishing attempt. This was not successful if actually catching anything was the purpose. Canoes are not very good fishing platforms.
At about this time, with kids growing up, and canoes less interesting than lots of other things, it began to be an encumbrance. Stored in the garden shed, it barely left enough room for a vehicle. I tried suspending it from the ceiling, but only the MX5 was low enough to comfortably fit under.
By this time, we were trying to give it away. The school at Thargomindah would have taken it - they had an outdoor programme, and there are suitable waterways out there, but I couldn't find a way to take it the 875 kilometres. Fleet managers aren't keen on car topping canoes.
My brother-in-law is a Texas lad, and he does a fair bit of inland fishing in the Dumaresq and associated waterways, so it has found a home with him.
Looking back, it's sailed down rivers from the Flinders in North West, the Burdekin up North, coastal streams in Capricornia, and waterways in the Great Divide.
It seems only fitting that it now will be navigating the upper reaches of the Murray Darling system.
Good bye, old friend, and thanks for the memories.
* Canoes aren't metric.
﻿
at February 09, 2016