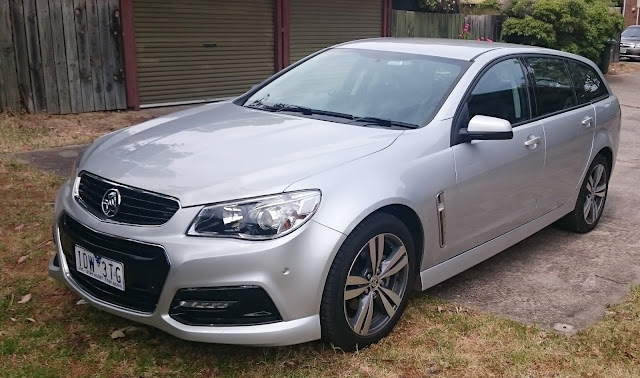 In Adelaide last week for our unit reunion, I hired a car.

To be precise, I hired two cars - one after the other. The first was an Hyundai i30, the second a Commodore SV6 Sportwagon.

The car hire was to get me around beyond the Adelaide CBD where we were staying. One of my sons who lives in the burbs was having a birthday, and I wanted to spend time with him. The public transport is good, but I wasn't familiar enough with Adelaide to use it to commute between suburbs.

In addition, for health reasons I was having a non-alcoholic reunion (a contradiction in terms perhaps) and this meant I could chauffeur my digger mates around. Staying cold sober when everyone else isn't is indeed a strange and wonderful experience.

When it became clear that the i30 wasn't really big enough for five aging and largish sexagenarians with buggered knees (we're ex-infantry), and people were happy to chuck in a few extra dollars, I swapped it for a Commodore SV6 which happened to be a Sportwagon.

So here, gentle reader, is a road test.

I didn't spend enough time in the thing to test some of the more exotic features (the self-parking for example) but did a fair bit of driving in the rough and tumble of the city commute. Two issues made that same commute challenging. One was transitory - the fact that most of the roads seemed to be in the throes of reconstruction - and one was a constant - the madness of allowing parking in the kerbside lane of the clearways out of peak hour.

One feature, the blind side proximity warning integral with the external mirrors, came into its own in dealing with the latter.

On the other hand, the interminable beeping from both front and rear proximity warnings nearly drove me bonkers in the rather squeezy garage at our lodgings.

It's a Commodore, so it handles and rides very well. The interior fit-out is leaps and bounds ahead of my VE, although it felt much the same to drive. I didn't find the Bluetooth easy to connect - but that seems to be an issue with my Sony Xperia phone rather than the audio in the car.

The 3.6 litre donk is torquey and gets a nice howl going when it kicks down. I needed to accelerate a bit sharpish from time to time to get into the correct lane, which is an absolute necessity in Adelaide.

The Sportwagon body is practical and doesn't increase the size of the vehicle footprint, unlike Holden wagons of yore which always inherited the long wheelbase from the Senator or Brougham. At no time did the car feel unwieldy, although this may have more to do with my familiarity with the Commodore ute than anything else.

This experience has made me consider swapping the VE for a VF ute when the time comes.
It's a great shame that these things will disappear when local production ceases. They're a very accomplished machine, and although I didn't get the chance to use it as a long distance tourer, should always be the weapon of choice for interstate travel in this wide brown land.

And the fuel consumption was a bit profligate - in the high thirteens.

But it was carrying five large individuals in urban conditions most of the time, and I wasn't driving for economy.
at October 24, 2015