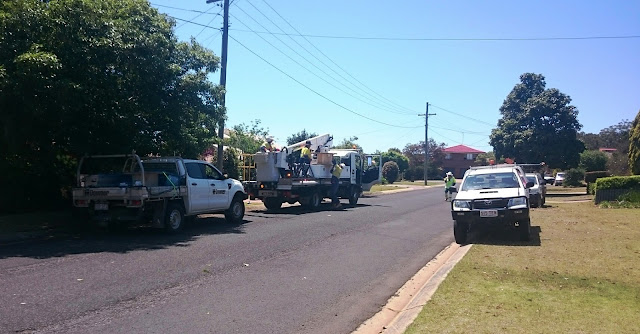 It's finally happened - the NBN cable is out front.

It took about eleventy-nine traffic controllers (who outnumbered the actual installers) and half a dozen blokes in hi-viz vests and hard hats to sling fibre off the existing poles carrying power and phone lines.

They did our street in a day.

We were to get the NBN in October 2013, but the Coalition (on the promise that the rollout would be honoured) were elected in September that year.

The voters didn't read the fine print. Consequently, we have the poverty pack NBN. It's two years late, not underground - so vulnerable to the super cell storms that occur in this neck of the woods from time to time - and we still don't know when the actual connection will take place.

Mind you, any form of internet connection has to be superior to what we've been enduring ever since the NBN contractors started accessing the antediluvian Telstra connections which haven't been touched for a very long time.

These same Telstra installations took a very dim view of being interfered with, and have been completely unreliable sine the NBN work started.

Bigpond got sick of me complaining, and when I told them I would pay no more bills until they could guarantee reliability, and promised complaints to the Telecommunication Ombudsman, they furnished a prepaid dongle which is reliable.

So now we wait for the connection.

As they say in the classics, we know how to wait.