Too Fat to Fly 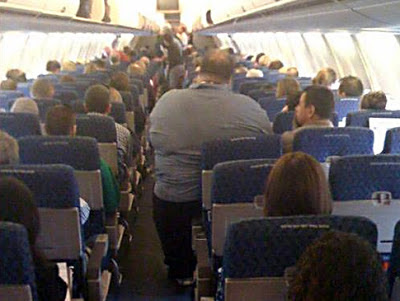 An Easyjet fight from Liverpool's John Lennon Airport to Geneva the other day was delayed by an hour-and-a-half because the plane was 300kg overweight due to an 'exceptionally high proportion of male passengers'.

It finally got off the ground after the passengers had a whip around to raise the additional compensation necessary to persuade a handful of larger (and heavier) passengers to disembark. The airline was offering $150 AU, and this, apparently wasn’t enough.

This incident emphasises a number of factors which to my simple mind, are bizarre.

First of all, the margins are slim. If 300kg makes that much difference in an aircraft weighing 140000kg on takeoff, they must be.

Still, the market rules, and the carriers, especially the budget variety, milk every last dollar out of every last litre of avtur.

You would assume that weighing passengers might be a good idea. Baggage is weighed, after all. At least, checked baggage is. It has always intrigued me that carry-on baggage isn’t.

Flying Adelaide-Brisbane last week, I remember thinking that some of the carry-on baggage was simply ridiculous. Some of it wouldn’t fit into the overhead lockers. I wonder how much a typical planeload of carry-on baggage weighs.

As for the checked in baggage, a family in the queue ahead of me had a mind boggling amount. I reckon they would have needed a half tonne Ute to get it to the airport.

How about the airlines asking for body weight to be provided when a booking is made? You’d only need an additional dialogue box on the webpage.

They could then charge on a sliding scale. The more you weigh, the more you pay.

Random weight checks could be done at the security queue. I always get taken out of the queue and checked (for explosives usually) which always makes me wonder how "random" the checks are - I reckon it's the beard.

Weighing passengers is completely logical. The heavier you are; the more expensive fuel is required to get you from A to B.

It would be a fascinating mathematical exercise to work out the average cost per kilometre for the full range of body weights. This could be factored into the ticket cost. If you’re slim, you fly for less than the average. If you’re chubby, you pay more.

It would also be a major motivator to stay slim.

I can imagine it now – a conversation between a couple of twenty-somethings at a restaurant – “Pass me the low-cal menu – I’m saving up to fly to London, and I’ve got six months to lose 15kg”.

Oh - and put an upper limit on the weights of both carry-on and checked baggage - no extra charge. If it's over the limit, it doesn't travel.

Incidentially, the airlines have an acronym for overweight passengers. They're called POS (persons of size).