Staring at the Abyss 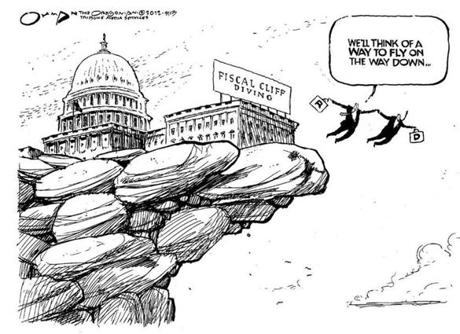 Will they or won’t they?

The Yanks, that is, go over the dreaded fiscal cliff.

On one level, I couldn’t give a rat’s, but on another, the one in which my wallet dwells, I’m more than a little bothered.

Like most self-funded retirees, most of my assets are in shares. If the stock market takes a dive (as we’re told by those who pretend to know that it will) if it happens, my wallet will be one casualty.

Generally, US politics represents the theatre of the absurd. It’s only slightly more entertaining than an undergrad’s production of “Waiting for Godot”. I never could hack Beckett, but was forced whilst at Uni to sit through such a show.

I didn’t enjoy it, but it seemed to make the difference between a credit and a distinction at the time.

There is no such incentive to observe US politics, except perhaps for some kind of morbid fascination. It is after all, a bit like watching endless reruns of Big Brother, but without any mystery about the outcome. US politics is entirely and dully predictable.

There are always goodies and baddies, compromise and collaboration are unknown, and the fundamentalists, of all brands, exert an influence out of kilter with their numbers. The goddamns have God on their side, after all, and that makes all the difference.

It’s worth considering how it got to be this way – their position on the edge of the cliff, that is.

I wonder did it have anything to do with the idea of cutting taxes during wartime. And we’re talking about two simultaneous wars. That was an absolutely suicidal policy. Could it be that the US is now reaping the whirlwind?

American corporations pay less tax than any other country in the G20 except Japan. They rank 19 out of 20. They will at some point have to face the absurdity of their being the exception to all the rules. Taxation is the price we pay for civilization.


Meanwhile, they spend more than the rest of the world combined on war and the materials of war. They have hit the wall. Exceptionalism has gone to the edge, and is now peering into the abyss
(You never put a full stop after "abyss").

That’s OK, if it was a problem just for the Yanks.

There is a solution.

Given that only slightly more than half the population can be bothered to vote at Congressional and Presidential elections, why can’t self-funded retires in Australia (and other countries affected) be given a vote in the US elections?

Didn’t the Yanks fight a war about being given a say in matters affecting their hip pockets at some stage in their history?

"the fundamentalists, of all brands, exert an influence out of kilter with their numbers".....any similarity with Greens and independants?

Any similarity ends with the fact that their influence doesn't damage any Yank's hip pocket.

Who cares about the Yanks' hip pocket .....merely pointing out that our own Govt is influenced by minorities with influence far greater than their numbers in representation have earned. That influence is "purchased" with promises by Labor that are paid for by tax payers. Slightly different to the method employed by the AWB in "purchasing" favors from wheat buyers. The AWB paid for their favors by taking a reduction in profit. The Government merely uses funds it borrows in the name of tax payers, knowing that the Labor party do not suffer a financial loss.

minorities with influence far greater than their numbers in representation have earned
That has been a feature of Australian politics for a long time. Remember the DLP?
The original DLP resulted from the conservative Catholic National Civic Council's anti-communist entryist tactics within the ALP and Australian trade union movement, which triggered the 1955 split. Subsequently, the DLP used the Alternative Vote electoral system to direct electoral preferences away from the ALP at state and federal levels, until its membership and party organisation declined sufficiently to render it electorally impotent in the early seventies. Its primary interests were related to industrial relations and foreign policy. It fell afoul of Australian resistance to that nation's involvement in the Vietnam War and suffered accordingly in terms of its electoral representation. Ross Fitzgerald - The Pope's Battalions - Santamaria, Catholicism and the Labor Split: Saint Lucia: University of Queensland Press: 2003
At least the Greens don't keep in power a government that conscripted young Australians to be killed in Vietnam.
The Coalition was kept in power by the DLP between about 1955 and 1974.

" a government that conscripted young Australians to be killed in Vietnam"....I bet you are one of those that believes that Whitlam withdrew the troops from that theatre.....he didn't you know.
Oh what a bitter twisted little man we are.....but proud enough of your participation as a conscript
to use the service number and photographic proof as your icon on this site. I see you have been bragging about your service and your belief in the inability of US citizens to make good soldiers, whilst you harang American gun owners. You had your chance to refuse to bear arms but failed to capitalise on it. I know you claim you didn't want to spend time in a Jail...so you chose the lesser of the two evils. You really are a funny fella.

I bet you are one of those that believes that Whitlam withdrew the troops from that theatre
No, Whitlam had a better idea, not to send them in the first place.
but proud enough of your participation as a conscript
If you can't understand that, you obviously have a problem holding on to two contradictory ideas at once.
Suggest you read - http://www.independentaustralia.net/2012/australian-identity/australian-history/reflections-on-the-fall/
You really are a funny fella
No, just an honest one......

"No, just an honest one......"
Honest discussing the event.....untrue to your ideals at the time.....proud of the fact afterwards.

"At least the Greens don't keep in power a government that conscripted young Australians to be killed in Vietnam".....didn't get the opportunity did they?
They weren't able to prevent it either.

"No, Whitlam had a better idea, not to send them in the first place".....Whitlam had a few good ideas.....hence his "lengthy" time in office.

No Cav, it's just Anonymous stuttering.
Arguing with yourself is boring - you always win.