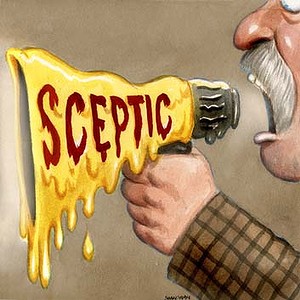 Some time ago, I conducted my own personal analysis of the greenhouse gas controversy.

It was interesting, therefore to come across someone else who has essentially done exactly the same. The significant difference with this bloke is that he is a professor of physics at the University of California, Berkeley.

Some extracts are quotable -

Our results show that the average temperature of the Earth's land has risen by about 1.5 degrees Celsius over the past 250 years, including an increase of five-sixths of one degree over the past 50 years. Moreover, it appears likely that essentially all of this rise is from humans' emission of greenhouse gases.

Moreover, our analysis does not depend on large, complex global climate models, the huge computer programs that are notorious for their hidden assumptions and adjustable parameters. Our result is based simply on the close agreement between the shape of the observed temperature rise and the known greenhouse gas increase.

He dismissess much of the hype -

It is a scientist's duty to be properly sceptical. I still find that much, if not most, of what is attributed to climate change is speculative, exaggerated or just plain wrong.
Hurricane Katrina cannot be attributed to global warming. Polar bears aren't dying from receding ice, and the Himalayan glaciers aren't going to melt by 2035.

As CO2 emissions increase, the temperature should continue to rise. I expect the rate of warming to proceed at a steady pace, almost one degree over land in the next 50 years; less if the oceans are included. But if China continues its rapid economic growth and its vast use of coal, that same warming could take place in fewer than 20 years.

This concurs with some of my previous writings on the topic. This is a letter I sent to Ian MacFarlane some time ago -

Everybody seems to be writing about climate change.

Almost without exception, these writers adopt a position on the issue related to their political views.
Given that the concern originated from the scientific community, the fact that it has become controversial is bizarre. There’s no doubt that the issue has been picked up by both ends of the political spectrum to fit specific (and very different agendae) but it really isn’t a political issue.

What is to me alarming are the recent assertions of both sides of the debate. On the one hand we hear hysterical conspiracy theories about world domination. On the other we are scared witless with forecasts of death by fire, floods or starvation. These polemics simply complicate what is basically a simple issue.

I believe that it is reasonable to insure the future of our planet against two basic threats which would affect the quality of the lives of my children and grandchildren. If we have to make financial and lifestyle sacrifices as part of this insurance then I can live with that.

The first threat is the strong likelihood that exponentially escalating carbon emissions are having negative effects long-term on climate. The second is that we are consuming non-renewable energy resources at a rate that isn’t sustainable if we want to enjoy the same lifestyle benefits currently available.

Either or both of these trends will bring us to a point where the benefits of not acting now will be far exceeded by the costs if we don’t.

Even if you completely reject the IPCC consensus, the issue of depletion of non-renewable will simply not go away.

I’ve been trained in risk analysis. I understand the low-risk high-consequence component of basic risk management. There is no more severe consequence to taking an unnecessary risk than the degradation of our planet. That consideration alone should be enough to convince the most avid sceptic that we need to act. Sure, we don’t need the hype, we don’t need political positions to be taken and defended, but we do need basic behaviour change on the part of individuals, corporations and nations.

For me, the most convincing argument comes from personal experience.

My wife and I lost our firstborn child (a daughter), in 1982. The post-mortem indicated that she died of an aneurism that was a result of a congenital defect. The reason for the defect was never established, but studies42 of the children of Vietnam Veterans contain some very convincing statistics.

This experience, by itself is a powerful personal motivator to support planned and dogged action by individuals and government to maintain our planet as a viable life source for future generations.

I am one of many veterans sprayed with Agent Orange. I've returned to Vietnam on a number of occasions in the last few years and seen vast swathes of the countryside that still haven't recovered after forty years. I've visited Vietnamese institutions for people with disabilities and have been staggered and horrified by the extent and number of these congenital malformations.

Vietnam has one of the highest incidence rates of these malformations on the planet. The use of this defoliant was an example of utter contempt of the natural environment. This mindset continues today in the attitude many of the sceptics. It is arrogant, totalitarian and basically suicidal.

These people can commit to future infanticide if they wish, but I don’t think it’s fair that they force the rest of us to join them.

There are some basic principles. If you want to blog about AGW, do so by all means, but avoid op-eds, stick to the scientific journals, and leave the politics out of it.
at July 31, 2012

Email ThisBlogThis!Share to TwitterShare to FacebookShare to Pinterest
Labels: AGW

I think most people agree the planet is warming. It is measurable.

What can we do about it?

The answer to these two questions are at best a guess; and therein lies the problem.

Why is the money collected from the tax sent overseas?

Why not use it to mitigate the problems said to be caused by climate change. You know, build walls to keep back the rising ocean; that kinda thing.

Cav
"Is it us?"
Irrelevant. We all live on the same planet.
"What can we do about it?"
Emit less greenhouse gases.
No guesses - simple really.
"Why is the money collected from the tax sent overseas?"
It's not a tax. It's a levy. No money is sent anywhere.
"Why not use it to mitigate the problems?"
Isn't it more logical and more cost-effective in the long run to prevent the problem in the first place?

By us, I mean us humans, not just Australians.

The carbon tax will morph into emissions trading scheme - that's when we pay others if our carbon dioxide emissions are not below some arbitrary figure dreamed up by somebody.

I dunno if the measures the world takes will reduce carbon dioxide and stop the oceans from rising - and neither do the scientists.

It is only a theory.

Cav
"that's when we pay others"
Not exactly - we trade carbon credits.
"It is only a theory."
Absolutely - just as insurance is a theory.

Cav
I have no problem with this.
We have only one planet, and we all share it.

In reference to the economic costs of carbon mitigation - See above - "I believe that it is reasonable to insure the future of our planet against two basic threats which would affect the quality of the lives of my children and grandchildren. If we have to make financial and lifestyle sacrifices as part of this insurance then I can live with that."
Most kids in my experience learn early in life to postpone immediate gratification in the interests of a long term payoff.
Unfortunately, there are some who only ever use their reptilian brain.

Absolutely - just as insurance is a theory

I am lost on that one....insurance is a theory?

Insurance is the promise of compensation in the event that a given calculated risk goes rzup. Those receiving payments for insurance invest the cash in money making ventures hoping that fewer risks go rzup and they can make a profit from the contributions and investments.
Your carbon mitigation or tax as the rest of us call it offers no compensation if the theory it is based on goes rzup. Merely billions in losses.