Fighting to the Finish 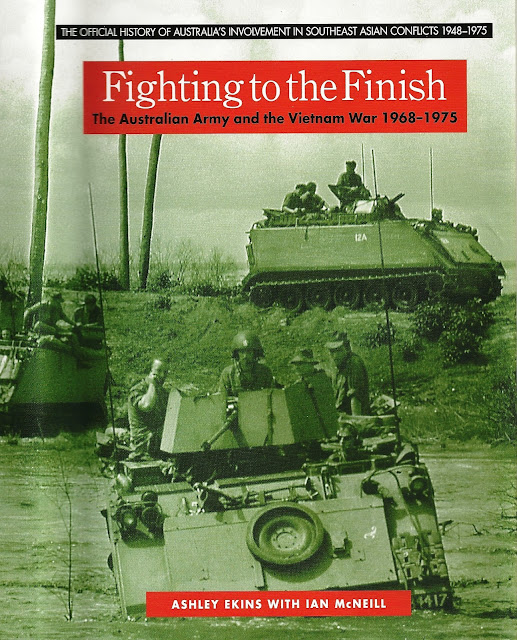 Time for a book review. I haven’t done one for yonks.

The book is Fighting to the Finish by Ashley Elkins and Ian McNeill. McNeill died in 1998, and his co-author completed the work, although McNeill had already been honoured with the Templer medal for To Long Tan.

It’s not the sort of book you’d read for entertainment, but if you’re after a defining account of the ground war for the Australians from 1968 until 1975, this is the best you’ll get. If you want to restrict your reading about Vietnam to two books, this one, and Paul Ham’s Vietnam, the Australian War would cover it.,

It’s structured generally as a chronology, but there are subheadings that deal in detail with aspects of the conflict – most of them fascinating diversions into detail.

Despite being written as a military history, it’s not so technical that it ever becomes dense. Perhaps my personal involvement contributed but I found it riveting, and I read it in about three days. Given it’s about 1000 pages, that’s noteworthy.

It pulls no punches, particularly in its descriptions of the conflict between the then government and the military. The overall impression is of political decisions being made with absolutely no consideration for the interests of the military, and no heed taken of their concerns.

This was obviously the case both in terms of how we were involved in the first place, but some of the shenanigans that went on around the Australian withdrawal are breathtaking.

In fact, the government of the day indulged in shenanigans both on the way into Vietnam, and on the way out again -

On 29 April 1965, when Prime Minister Robert Menzies announced his government's
decision to commit the first battalion of Australian combat troops to South Vietnam,
he said this was in response to a request from the South Vietnamese Government.
Questioning of this basis for the commitment had begun well before the war ended.
June 1971, the New York Times published leaked extracts from a secret US Defense
Department study of American involvement in Indochina that became known as the
Pentagon Papers. Australian newspapers picked up the story, focusing on evidence
the reports that suggested the supposed request from South Vietnam in 1965 was
‘manufactured' and that the Menzies government had deceived the Australian people. (p689)

And on the withdrawal -

On 18 August, Prime Minister McMahon announced his government's decision
withdraw the task force from Vietnam." Hanoi's plans to overrun the Republic
Vietnam had been 'frustrated', McMahon assured parliament, and 'changing and
improving circumstances' now allowed 'all remaining Australian combat forces' to
return to Australia. The enemy threat remained in Phuoc Tuy, he conceded, and
'some setbacks may yet occur'; but the enemy had 'largely lost the initiative' and
South Vietnamese 'territorial forces should be able to handle the likely contingencies'.
Most Australian combat troops would be home by Christmas; stores and equipment
would follow early in 1972. 'In compensation, the government pledged A$25 million
military and civil aid to South Vietnam over the next three years. There were also
plans to retain some military training and advisory elements, such as instructors in
Jungle Warfare Training Centre.
This was contrary to the army's advice against leaving an Australian residual force,
which could not be adequately protected and might become a prime target for the
enemy. In an echo of the army's initial 'one out, all out' policy, Major General Graham,
Deputy CGS, had earlier signalled Dunstan in Saigon: 'It will be in best interests of
army to make a clean break'.
(p 603)

South Vietnamese 'territorial forces should be able to handle the likely contingencies' - was BS and the government knew it, but the tide of public opinion had turned against the commitment, and the Coalition was covering its backside.

And the way it was done was against the advice of the military.

There’s also a lot of interesting background about the tensions between the American military hierarchy and our own. Generally, various task force commanders were continually at odds with the Americans on how the war should be fought.

Fortunately for the sixty thousand or so Australians involved, our commanders usually prevailed.

So I’d recommend it. Having said that, you have to shell out $100 to buy it. Maybe it’s one of those books best borrowed from a library.

I had to buy it of course – I appear in two pictures – both taken by that genius of photography, Denis Gibbons.

Anyway, that’s my excuse for buying it.

It's available on-line from the AWM.

I was amazed that the CO 3RAR conceded that he had made a mistake in our battle at Tan Ru by being too close to the battle and hindering artillery and gunship support - it was fitting his chopper was shot down.

Does it cover the peace deal? You know, the one where the South Vietnamese Govt wasn't even involved and where the NVA were allowed to keep two divisions of soldiers in South Vietnam as part of the deal.

We cut and run and left the South Vietnamese to their fate. Somehow our media, politicians and the general public seem to think that this was OK.

Cav
The media and the general public had the wool pulled over their eyes by the pollies. In any case, public opinion had come around to the notion that the war was wrong, and the media fed this.
It became a self-fulfilling prophecy. The last people to be considered were the Vietnamese people and/or the soldiers.

From the look of those photos, I guess you two were never allowed to swim in the Olympics.