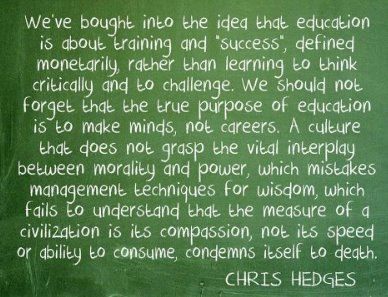 Both my parents were teachers, my bride is a brailler and teacher of the blind, and one of my sisters teaches music.

I have a commitment, therefore, to education, and to its function in society.

Hopefully, I've learnt something about the activity, having been up to my ears in it since 1968. That's 44 years and counting.

As a result, I've developed a set of beliefs about learning and teaching based on what I've seen and done since 1968.

The most fundamental of these understandings is that teaching is about change, initially in individuals, and as a consequence in society. I belong to the group of teachers that believes that beyond passing on society's beliefs and mores, a teacher has a role in making the world a better place by encouraging students to reflect on what they see, and if they believe it can be improved, they should set out to do so.

Good teaching is essentially subversive, something that becomes clearly evident whenever totalitarians seek and gain power. Teachers are usually the first to be controlled or eliminated.

Obviously, working with disabled kids since 1970, has convinced me that for those disadvantaged through impairment, education is one way of removing barriers to best quality of life.

Hence, I've always worked hard to make kids with disabilities as independent as possible. Ultimately, the amount of real independence they develop is directly proportional to later quality of life, defined as power to make and shape their own lives. The less they have to rely on others, the better their lives.

Which brings me to the image above. The difference with kids with disabilities is that you're teaching basic skills as well as the capacity to be critical. The sequence (skills first) is vital.

I know a few universities that could use that.