More Adventures in the Blogosphere

I’ve had a good time this year posting comments on the sites of the more risible of those who make a living out of peddling opinion.
Opinion is not all they peddle. Prurience, prejudice and pretentiousness are also evident.

It seems that the possession of an over-inflated ego or at least a very delicate one - is also a prerequisite, .
On some of these sites, I’m frequently banned, or have my posts deleted. This is always a good sign. It indicates that I'm on the money. 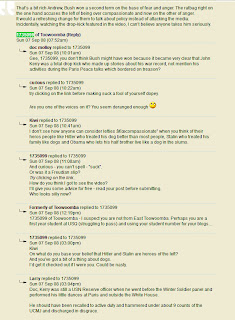 Others who post on these sites abuse (see above), denigrate and threaten, but they are posted so long as they toe the party line. An example is  Curious (above). No substance in the post - only a cheap shot, but that's OK by the mods.
I avoid name-calling and abuse, so there must be other reasons for the censorship.
One possibility is that the site owner feels threatened by the post. This may be because the original opinion posted is obviously biased or pays little attention to the facts. The deleted post below is a good example. Blair was either in too much of a hurry or two lazy to read the complete article he linked to. He therefore wasn't too keen to find that his hero told porkies, so my post was deleted - credibility y'know....poor petal.


The other likelihood is that the blogger has an argument that he can’t sustain. This doesn't happen quite so often, because you don't get arguments on these sites - only ill-considered opinions.
Given that it isn’t a good look for a “professional” to have errors and bias identified by an amateur, naturally the corrective post doesn’t make it. It persists of course, as a screen shot, and can always be posted.

The second deleted post below was a reply to someone having a go at my moniker. I wasn't allowed to defend myself. This is petty stuff - you'd expect someone who earns his living through blogging to be a little more secure. I would have thought that would have made for some interesting banter, but on this blog, there's a politically correct line that mustn't be crossed.
If opinion can be bought or sold – and this is of course what you’re seeing here – real dialogue is crushed. We’re left with the kind of pseudo discussion which passes for political dialogue across the pacific. Comparing US style political discussion with what used to be accepted here is similar to comparing a doughnut to a decent curry. It's easy to see that Blair and others of his vintage belong to a generation that never saw war and have been indulged and cossetted. They take themselves with a seriousness that is bizarre.
The blogosphere is a great leveller. It is also a platform for discussion and discourse. It’s a shame that the “professionals” have forgotten this.
They’d enjoy themselves more if they remembered that in this country free speech is valued and indulging in a little banter (virtual or real) is an Australian pastime.